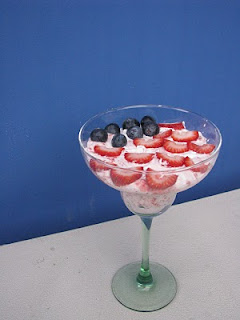 “What’s a Fool?” I overheard a woman ask her friends when I served Raspberry Fool at a dinner party I was catering. “It’s like sex on the beach,” responded one of the friends. “But better!” a third friend chimed in after taking a bite. A Fool might have a ridiculous name, but it makes up for it in so many ways. It tastes exquisite and can look quite elegant when served in a pretty dish and garnished with fruit, mint, or edible flowers, but it’s one of the easiest desserts to prepare as it is simply made by folding pureed fruit into whipped cream. Perhaps the name of this humble English dessert comes from the fact it fools you into thinking it has taken hours to prepare even though it can be ready in less time than it will take you to grill your Fourth of July burgers. 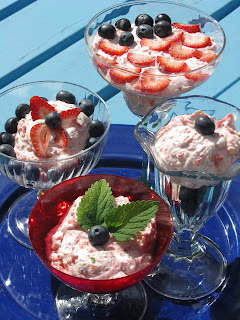 Since the Fourth of July commemorates the United States gaining independence from the British, I thought it would be fitting to make a traditional English dessert in good ‘ole American fashion and make it with strawberries and blueberries as a salute to the red, white, and blue. (We’ll ignore the fact that the British Union Jack is also red, white, and blue.) This Fourth of July, while you’re gathered around the barbecue with friends and family, consider whipping up a batch of Fourth of July Fool to savor while enjoying the debut of summer and watching the fireworks.

Double Strawberry Fool with Blueberries
for the Fourth of July
The use of both fresh strawberries and strawberry preserves enhances the strawberry flavor. The berries can be prepared in advance, but the cream should be whipped and mixed with the berries just before serving. 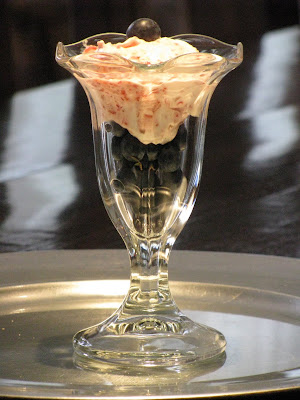 *Berries tend to have a high level of residual pesticides, so when available and when your budget allows, it’s usually a good idea to stick to organic berries. 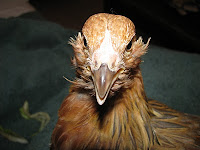 Remove the tops of the strawberries (if you happen to have a backyard flock of laying hens like I do, save these for the chickens because they absolutely love strawberries!). 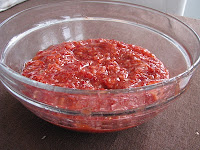 Slice the strawberries into the bowl of a food processor (saving out a few berries to use as garnish). Mix in the jam. The amount of jam needed may vary slightly depending on the sweetness of the strawberries. Puree the berries and jam using 10 1-second pulses. The consistency should be viscose but still chunky. Allow to macerate for at least 10-15 minutes. 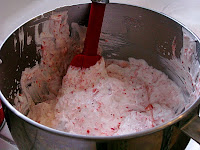 In the meantime, whip the cream until soft peaks form. Fold the berry mixture into the cream using gentle, even strokes. 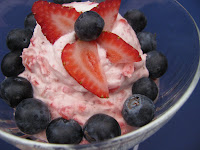 Serve in dessert cups or sundae glasses and garnish with strawberries and blueberries. Enjoy with friends and family, but don’t tell them how easy the dessert was to prepare!