When God Closes a Door He Opens a Window 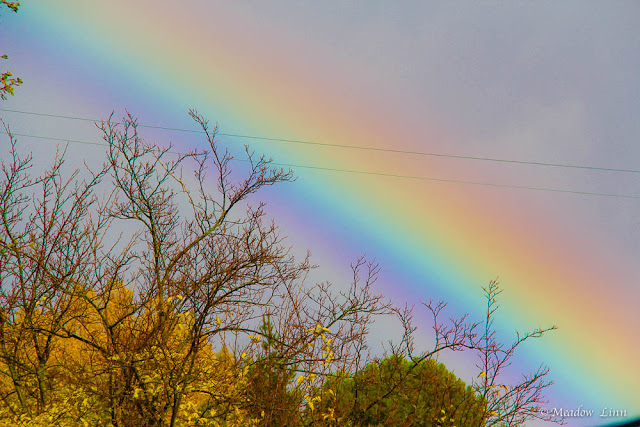 A peach is ripe when slightly soft. A melon is ready when its perfume fills a room. And, milk has a “sell-by” date. But, matters of the heart are not so simple. How do we know when we should turn right instead of left, or when we should keep fighting and when we should look for a new direction? We were born into this world without an instruction manual or even a legend (like on a map) to decipher the signs that propel us on our path.

Many of us are familiar with the expression, “When God closes a door he opens a window.” Sometimes, though, he doesn’t just open a window, he rips the roof right off what we thought was possible, making way for something far better.

Last night I dreamed I was applying to universities and had been rejected from every single one. However, hidden underneath the pile of rejection letters, I found a small envelope offering me a free ride to a school in the Caribbean, even though I hadn’t even sent in an application. In my dream, when I went to visit the tropical island that was home to the university, as I stepped off the plane, I inhaled the scent of plumeria and heard the gentle sea breeze rustling the palm fronds, and I realized that this far surpassed the experience I would have had at the other schools.

This dream was not totally out of the blue. Eight years ago, nearly to the day, I applied to PhD programs in French literature at Stanford and Berkeley. I didn’t particularly have a burning desire to be an academic or even a professor, but up until that point I’d either been in school or teaching school since the age of five, so it seemed like a logical step after receiving a masters degree in French Cultural Studies at Columbia University.

I still remember exactly where I was standing when I read the rejection letters.

Now, when I look back on this, I’m filled with so much gratitude. That thin piece of paper that said, “we regret…blah…blah” opened the door to a completely different life. I quit my job, moved to Switzerland, and began to step out of my comfort zone.

A PhD in French literature at Berkeley and Stanford generally take seven to nine years, which means that just about now I’d be receiving my degree. When I look back on the myriad experiences I’ve enjoyed, the people I’ve met, and the personal growth I’ve had, it seems hard to imagine that had I been accepted at one of these schools, I would still be wedged into a collegiate office analyzing Sartre and Camus. I have no doubt I would have been satisfied had this been my life, but I don’t think I would have been particularly happy. I just didn’t know it at the time. Thank goodness the powers that be—either the people in the admissions office or the Almighty himself—knew to send me in another direction.

If you’d asked me back then if I thought I’d be doing what I’m doing now, in a million years, I wouldn’t have guessed that this would be my life. And, you know what? This is so much better than what I’d dreamed up for myself eight years ago.

This is not the first time this has happened. Often when I dream of my future, I’m stuck within the confines of what I already know. Even when I dream big, it’s still based on a present version of myself. It’s only when I’m willing to let go of the reins and ride the wave of life that I can end up somewhere so much more miraculous than I could have ever imagined.

Although I’m still mired in my search for love and don’t yet have the luxury of hindsight, I imagine ten years from now I’ll look back and think, Thank God things didn’t work out the way I’d hoped, because this is so much better. The challenge, however, is being willing to let go enough so that when doors keep closing, God can swoop in and rip off the roof, or at the very least open a window.

What in your life is better because you didn’t get what you thought you wanted? How would your future be different if you allowed for alternate routes?

I love grocery shopping, but sometimes I get so caught up in work that my cupboards get pretty bare. Opening the refrigerator on those days can be disheartening, especially when I’m really hungry. However, as though God has opened a window, when I look deeper into the inner sanctum of my kitchen, I can usually find ingredients for a hearty soup. And soup always feels so satisfying and nurturing. One of the great things about making soup is that some of the best creations happen when I let go of the need for my soup to turn out a particular way, and I give in to the contents of my fridge. This is a delicious soup for a rainy day. Use whatever you have on hand and see what culinary magic you cook up!

In a large stockpot (at least 6 quarts) over medium heat, sauté the onion and garlic with the olive oil and a pinch of salt and pepper until the onions are soft and translucent, about 5-10 minutes. Meanwhile chop the carrots and celery and add them to the pot. Chop the cabbage and parsley and add them to the pot as well. Stir frequently to make sure nothing sticks to the bottom. Add the diced tomatoes, water, and cider vinegar, and another small pinch of salt and pepper. Increase the heat to medium-high. Once you attain a gentle boil, reduce the heat to maintain a simmer. Cover and gently simmer for about an hour. Add the lentils, cover, and simmer until the lentils are soft, about 45 minutes. Add salt to taste. Enjoy on a cozy rainy or snowy day! 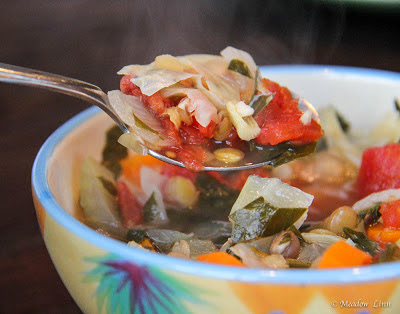 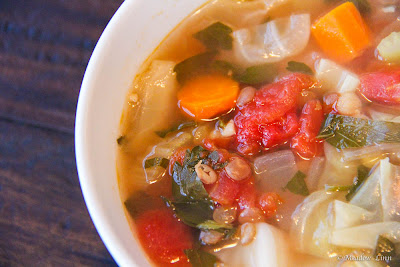