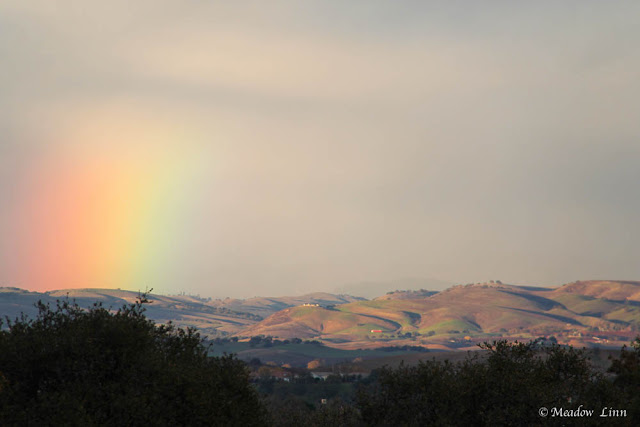 Yesterday I saw the most incredible rainbow of my life. I’m not known for superlatives, but it was the biggest, brightest, and longest-lasting rainbow I’ve ever seen.

I’d been cooped up in the house all day answering e-mail, paying bills, and organizing paperwork. Needing a change of scenery, I grabbed my keys and headed to Target for a new bathmat.

Just as I was wondering whether I should swing by the bank first, I looked up and there it was…the most incredible rainbow I’d ever seen. Most of the day had been sunny and other than a few dark clouds in the late afternoon, there was no sign of rain. But, there it was…a magnificent, luminous rainbow filling the sky. 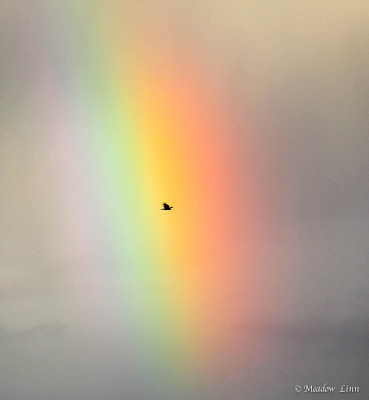 Everywhere I looked there were cars pulling off to the side of the road. I thought, Wow, they see it too. How wonderful that we’re all reveling in nature’s majesty! But then I noticed that one woman was unloading groceries, another was checking the air in her tires, and a man was picking up his kids from daycare. None of these people had seen the rainbow, or if they had, they were too focused on what they were doing to give it more than a passing glance.

Although I was completely enraptured by the light show in the sky, I realized that I hadn’t pulled over either. I was sure that at any minute the sky would fade back to gray and the rainbow would become just a memory. So, I continued.

The rainbow, however, wasn’t fading. So, for a better view, I made a rapid right turn and gunned my car up the steepest hill I could find. Nearby, I noticed an old Buick filled with an equally ancient couple. I was certain that they too were admiring the rainbow, but it turned out that they thought I was lost and had stopped to offer me directions.

This experience reminded me of one of my favorite moments in The Little Prince. The eponymous little prince is talking to the switchman at a train station, and he asks him where the people in the trains are going in such a rush. “‘They are pursuing nothing at all,’ said the switchman. ‘They are asleep in there, or if they are not asleep they are yawning. Only the children are flattening their noses against the window-panes.’ ‘Only the children know what they are looking for,” said the little prince.” 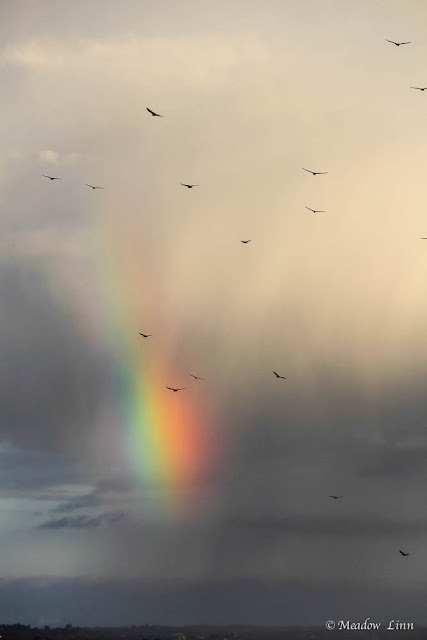 I’ve been thinking about this a lot, especially with the holidays right around the corner. For me the holidays are a time to slow down and revel in the magic of the season. Unfortunately, as an adult I’ve lost some of my childhood wonderment. Most days I’m glued to my computer, trying to keep up with everything. It’s so easy to get caught up in what seems important instead of what’s truly important.

The truth is…there is majesty around us all the time. Just because the woman with the groceries or the man waiting for his kids didn’t look up to see the rainbow, doesn’t mean it wasn’t there. And just because I’m racing to and fro trying to make a dent in my “to do” list, doesn’t mean that there isn’t beauty surrounding me everyday. I just have to be open to it. Henri Matisse said, “There are always flowers for those who want to see them.”

I want to be the kind of person who drops everything in order to spend a few minutes gawking at a magnificent rainbow. I want to be like the children in The Little Prince with their noses pressed against the window. Every day we make choices about what we do and how we live. Even the things that don’t feel like a choice are indeed still a choice. So, I ask…is there anything on your “to do” list so important that you can’t spare a few minutes absorbing the majesty of a rainbow? 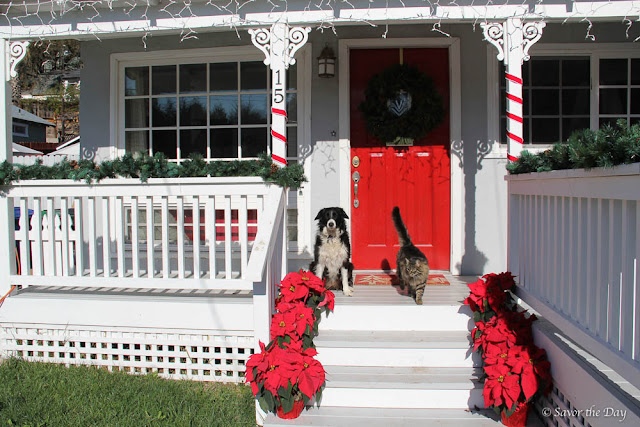 What better way to savor the season than with a decadent, moist chocolate cupcake! I don’t purport that they’re healthy, but I guarantee they’re delicious. These cupcakes are especially great for those who want to indulge in holiday treats but don’t eat gluten or dairy. However, they’ll be a standout at any magical holiday gathering, especially if you bake them with love.

Generally, I try to avoid long lists of ingredients, particularly ones that call for a small amount of items you wouldn’t otherwise have in the cupboard. For this recipe, however, it turns out that the cultured coconut “yogurt” and the small addition of potato starch and tapioca flour make a huge difference in the overall texture of the cupcake. I’m so sorry. But, I promise…it’s worth the effort. 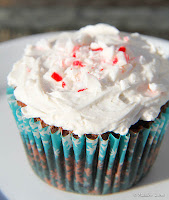 
Preheat oven to 350ºF and position rack in center of oven. Line a cupcake pan with cupcake liners. Set aside.

Combine the oil, chocolate, and cocoa in a double boiler (or small heatproof bowl) over barely simmering water. Whisk until smooth. Set aside until just warm.

In a medium bowl, whisk the eggs with the sugar, vanilla, and salt. Whisk in the cooled chocolate mixture. Add the flour and cultured coconut “yogurt” and mix until smooth and fully combined. Pour the batter into the prepared pan.

Bake 20 minutes or until an inserted toothpick comes out clean. Cool on a rack until the pan can be touched safely. Remove cupcakes from the pan and cool to room temperature before frosting them. 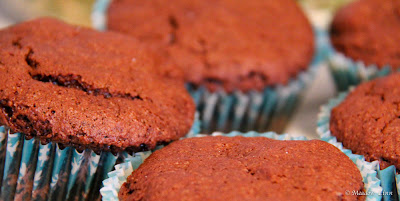 *Most palm oil comes from Asia where orangutan habitat is rapidly being destroyed. Spectrum Organic, however, gets theirs from Colombia from small, sustainable farms.

Whisk the vegetable shortening in a standing mixer on medium-high until soft. Add the sugar and mix on medium-low for about 20 seconds. Add the vanilla, peppermint, and water and whisk until light and fluffy, about 3 minutes.

Unwrap the candy cane and place it in a Ziploc bag. Smash it with the back of a wooden spoon. Frost the cupcakes and then sprinkle the crushed peppermint candy on top.

(If making in advance, store frosting tightly covered at room temperature. It will become too hard if refrigerated.) 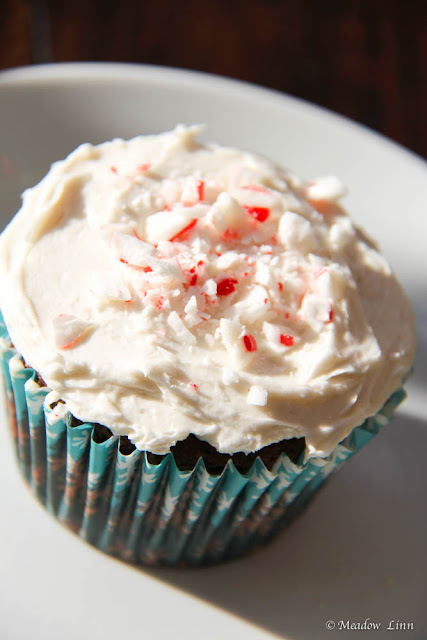 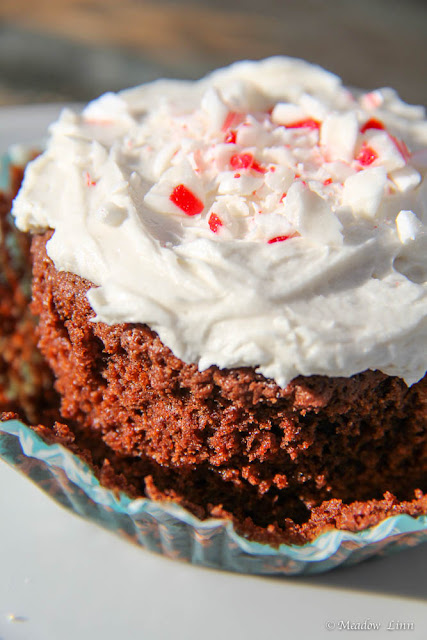 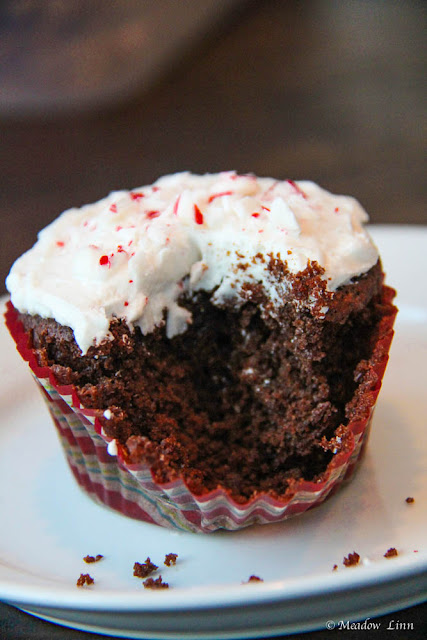