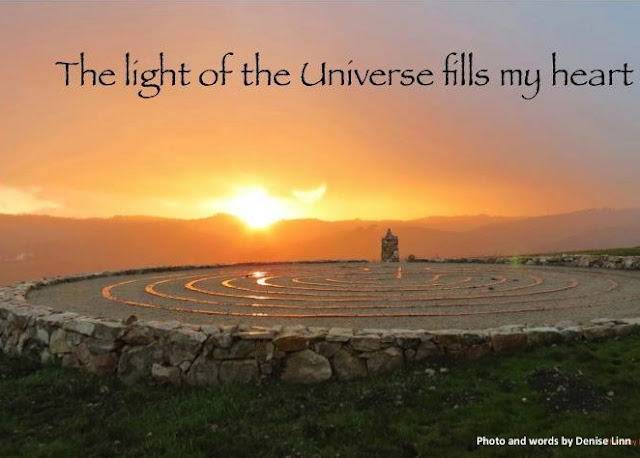 Circles symbolize wholeness, connection, and life; however, sometimes a circle needs to be broken so that a new circle can grow into being. For instance, when identical twins are formed, one egg breaks into two equal parts. The fissure is necessary for both to thrive.

I spent the few days leading up to Christmas with my parents in San Francisco. It’s become one of our yearly holiday traditions. We eat at nice restaurants, admire the lights in Union Square, and huff and puff our way up every hill we can find.

This year, in the dark of night on the shortest day of the year, we decided to walk the outdoor labyrinth at Grace Cathedral. Many consider the winter Solstice to be one of the holiest days of the year, a time when the veil between this realm and that of the Divine is the thinnest. It’s a powerful time to focus on gratitude for the past year and ask for guidance for the year to come.

As usual, when making a wish for my future, my focus is on getting married and having children. As I followed the serpentine path of the labyrinth, I had a vision of a man and three young children waiting for me at the end. They felt so real that I could see their smiles and hear their mirthful chatter. 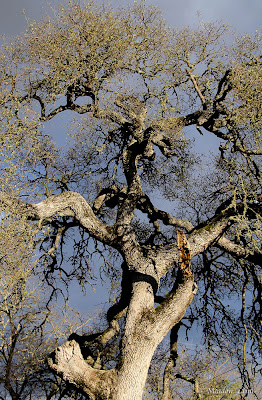 When my mom, dad, and I finished walking the labyrinth, we stood for a moment in silence and held hands, sending our prayers into the ethers. Similarly, before meals my family usually holds hands and says a blessing. For years, I’ve imagined a fourth person (my husband) at our table, and I imagine holding his hand and including him in our prayer. For a moment at the labyrinth I was tempted to imagine the man and the children from my vision joining our circle. But then, in a flash, I realized that I’d been going about it backwards.

Instead of including a man in our circle, I needed step away from the tight circle I’d created with my parents and join the man and the children waiting near the labyrinth. So, while holding my parents’ hands, I imagined myself releasing their hands and rejoining the palms of my mom and dad together. They would in effect be creating their own circle. I then pictured myself forming a circle with my future husband and children.

As 2013 is beginning, I’ve been thinking about what I want for the coming year and how I’m going to make it happen. No matter how much I say I want a family, at this point, I haven’t really made room for it because the bond I have within my current circle is so strong that it would be difficult to penetrate. Just like with the example of the twins, letting go and forming a new circle doesn't diminish the first, it just makes a second one that’s equally strong.

Are there things in your life that you want but can’t seem to reach? Consider changing your approach. As we step into this New Year, spend time opening your heart and being willing to receive guidance from above. If it hadn’t been for the time I spent quietly walking the labyrinth, I wouldn’t have had this powerful realization.

I wish you a new year filled with joy, love, happiness, and of course…good food!


Egg in a Nest

As I venture forward to create my own circle, I carry with me all the love, joy, and delight I’ve experienced over the years. When I was a little girl, my mom used to cut circles in the center of bread and fill it with a fried egg. It was one of my favorite breakfast treats. Whatever you call it—Toad-in-the-Hole, Egg in a Basket, or something completely different—it has great symbolism. When you cut the hole in the bread you’re in effect creating two circles, the one in the bread and the one removed from it. And, the egg represents yet another circle.

Using a sharp knife cut a circle in the center of each piece of bread. Carefully butter both sides of the bread. Do the same with the circle that you’ve removed from the bread—when it’s pan-fried it’s one of the tastiest bits. Melt a bit of butter in a skillet over medium heat. Put the bread in the skillet. When the underside is golden brown, turn it over and crack an egg into the hole (circle). When the bottom half of the egg is cooked, flip the bread, careful not to break the yolk. Continue to cook until the egg white is set and the yolk is cooked to your preference. As you enjoy this childhood favorite, consider thinking about the many circles and cycles in your life. 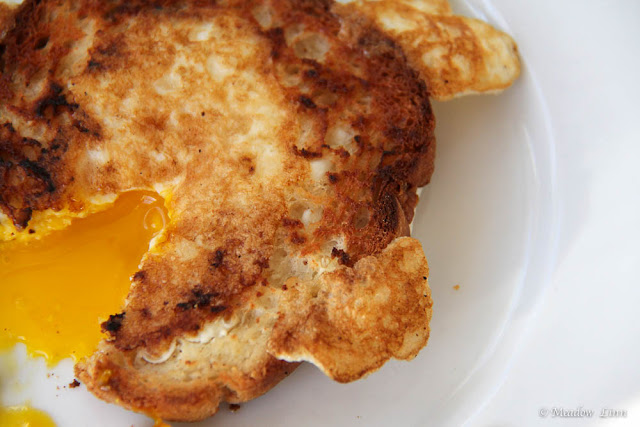