What if you said, “yes” to every invitation, request, and opportunity? What if instead of spending time and energy making excuses and avoiding people and experiences, you simply said, “yes”?

This is the premise of a Jim Carrey movie called Yes, Man. His character puts great effort into avoiding his friends and saying “no” to everything. He does this because it’s more comfortable to be unhappy. However, after being dragged to a self-help workshop, he makes an oath to say, “yes” to everything. From there we see how his life begins to unfold in exciting new ways.

By saying “yes,” he opens himself to an entirely new world filled with fun, joy, and adventure. By the end, however, he learns the important difference between saying yes because he wants to and saying it because he thinks he has to. “No” is an equally powerful word. Being genuine and authentic and saying “no” when that’s what you mean is vital to living a balanced life.

I was thinking about the power of “yes” last week while flying to Chicago. “Yes” can mean being willing to go with the flow and accept whatever comes your way. Often when you resist something that’s going to happen regardless, you create needless stress, discomfort, and frustration.

My heart was racing as I drove to the airport. I’d left my house later than planned, and I was worried I wouldn’t get there in time. As I was looking out the window at the beautiful green hills, I remembered a saying my mom taught me when I was a little girl: “Right place, right time.” I repeated it over and over again in my head. It’s an affirmation that you’ll always be exactly where you need to be when you need to be there. At that very moment, I received a call from United Airlines…my flight was delayed! Wow, going with the flow really works!

At the airport, when I approached the desk, I cheerfully announced, “It must be my lucky day, I’m the only one in line!” The man gave me a quizzical look as if to say, “Yeah, right…lucky? Ha! Your plane’s delayed.” When he told me that I’d most likely miss my connection and would have to spend four hours in Los Angeles. I said, “Well, I was wondering when I’d have time for lunch. Now, I know that I’ll definitely be able to grab a bite to eat!” Since I knew there was nothing I could do about the missed connection, I figured I might as well simply say, “yes” to the experience.

Offhandedly, I mentioned that arriving in Chicago so late would be difficult for the friend I was visiting because she has young children. Within minutes he had me booked on another airline with an arrival in Chicago only 20 minutes later than originally scheduled! I’m certain he wouldn’t have done this had I been cranky, but since I was willing to go with the flow, there was a certain grace to the events of my day.

There are, of course, times to say, “no” and there are times to fight for your needs. I’m not advocating simply being “nice” or letting yourself be pushed around. What I’m talking about is a genuine desire to say “yes” to what is when that’s the best course of action. When you say, “yes,” you become an active participant in the adventure rather than a victim to circumstances beyond your control. And when you do so, you’ll start to notice that things begin to manifest in wondrous ways. Sometimes events actually change because of your newfound attitude, and sometimes they simply seem better because your perception and interpretation of them has changed.

Set boundaries, know your limits, and say “no” when necessary, but also practice saying “yes.” You never know what magic awaits you. Sometimes it’s a lot more fun to welcome life rather than keeping it at bay. This is something I’m still working on, but bit by bit, I’m getting more practiced and it’s coming to me more easily.

This is a dessert you can say, “Yes!!” to. It’s delicious, easy to make, and pretty darn healthy as far as desserts go. Last summer when my mom and I were in Washington, DC, we had a similar pudding at Le Pain Quotidien, and I’ve been lusting after it ever since. Since we don’t have a Le Pain Quotidien within 200 miles, I decided to create my own! 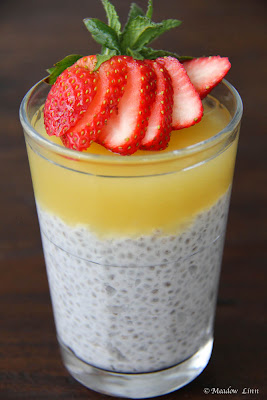 Garnish:
Fresh berries, such as strawberries, blueberries, and blackberries
Sprig of fresh mint

*There’s new research to support that agave might not be the wonder sweetener we thought. However, I’ve chosen to use it here because the flavor isn’t as strong as honey. And since it’s liquid, it dissolves better than sugar.
**If you can find pure passion fruit nectar, it’s divine in place of the pineapple juice.
***I used agar agar flakes from Eden Foods, found at my local Natural Foods store. Agar sets at room temperature and sets faster than gelatin!


In a medium bowl, combine the coconut milk, water, agave, and vanilla. Add the chia seeds and mix well. Set aside. You’ll get the best consistency if you let it sit covered in the fridge overnight. The next day, divide the pudding between six 7-ounce, clear juice glasses. Aim to fill each glass approximately 2/3 full. Use a damp towel to wipe down the sides of the glass.

In a small pan, combine the pineapple juice and agar agar. Bring to a strong boil, reduce heat and simmer for 5 minutes (or until the agar agar is dissolved), stirring occasionally. Cool slightly.

When the pineapple mixture is cool but still not set, very gently spoon it over the pudding until the glass is nearly full (leave some room for the berries). If any chia seeds float to the top, remove them with a spoon. When firm (about an hour), top with fresh berries and enjoy! Yes!!! 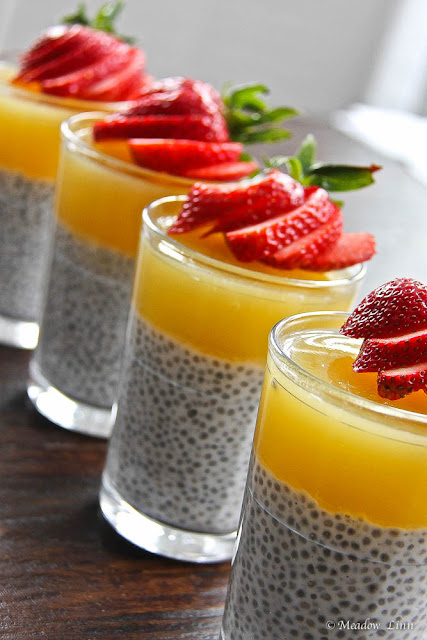 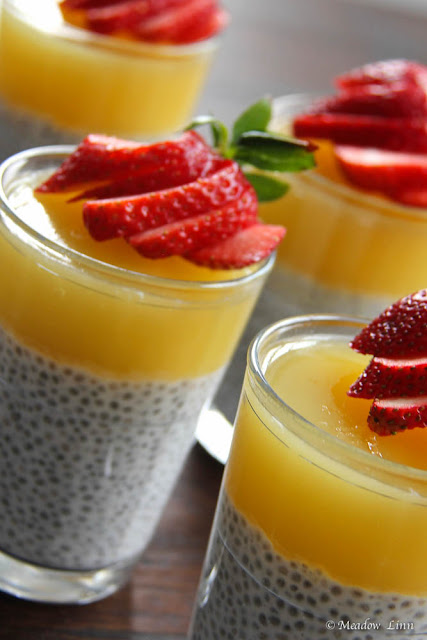