Give Sprouts a Chance

When I asked for a second helping of Brussels sprouts, he gave me that dubious look reserved for drunk college girls and the mentally unstable. For the record, I had not been drinking and as far as I know, I am of sound mind and body. I had been so excited that the dining hall at my university was serving my favorite vegetable that I couldn't hold back. Apparently, not only had no one yet asked for extra sprouts, no one had actually asked for any at all. The work-study student assigned to doling out Brussels sprouts had been bored out of his mind throughout the lunch service as the line passed him by for chicken tenders, pizza, and frozen yogurt.

I have always loved Brussels sprouts. I owe my adoration of this misunderstood and often maligned vegetable to my mom who, when I was little, decorated "Brussels sprouts trees" (the stalk of the plant with the sprouts still intact) for our holiday meals. Using toothpicks she inserted cocktail onions and cherry tomatoes into the stalk so that it looked like a miniature Christmas tree. As I grew, and it became increasingly difficult to find the "trees" in the market, we ate steamed Brussels sprouts with butter and lemon instead. However, walking into my local Trader Joe's the other day, when I saw a huge pile of "Brussels sprout trees" I was flooded with memories of childhood Thanksgivings.

For me, Thanksgiving isn't Thanksgiving without the sprouts. A few years ago, I discovered that roasting Brussels sprouts in a hot oven caramelizes them and makes the outside crisp and delicious while the inside is soft and sweet. Prepared this way, I could eat them by the bowlful, but I think even those who aren't as pro-sprout as I am will enjoy these savory delicacies. Although I love the "tree," I think Brussels sprouts taste even better roasted in the oven. Here's to starting new holiday traditions and giving Brussels sprouts their just deserts! 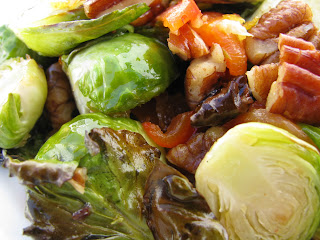 
Preheat the oven to 500ºF. Trim the Brussels sprouts and remove any blemished leaves. Cut in half from pole to pole. Be sure to keep the leaves that fall off. They are my favorite part of this dish because they get really crispy in the oven. Place the sprouts on a baking sheet lined with parchment paper. Toss with the olive oil and salt. I use my hands and do it right on the baking sheet to avoid having to wash an extra bowl, and I find that my hands do a better job mixing than a spoon. Place in oven.

While the sprouts are in the oven, slice the red bell pepper and zest the lemon (If you do not have a zester, use a box grater and chop the lemon rind into smaller pieces. A Microplane will make the zest too fine). When the sprouts are just starting to brown (after about 10 minutes), remove them from the oven and add the bell pepper and zest. Stir to combine. Return them to the oven. (The later addition of these ingredients will keep them from burning).

Roast the sprouts for another 10 minutes. Total baking time should be about 20 minutes, but this will depend on the size of the sprouts. They are done when the outside leaves are brown and caramelized, but the insides are still somewhat firm. Do not overcook! Remove from the oven, stir in the pecans (or pine nuts) and enjoy. 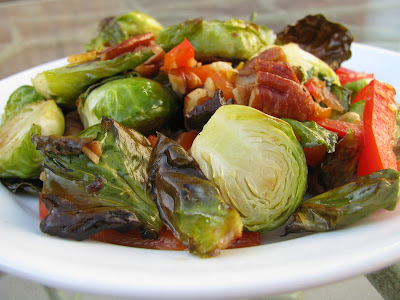