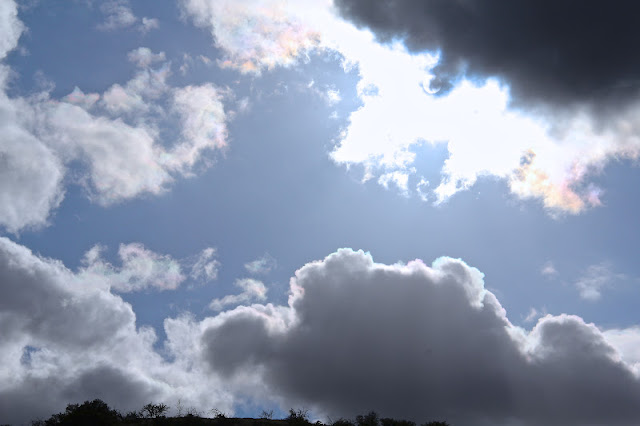 What happens when “weird” becomes normal and “normal” becomes weird?

I was the weird kid in elementary school whose lunch bag had almond butter and honey “sandwiches” on rice cakes instead of bread, brown rice and vegetables instead of pizza, and seaweed (nori) cut into fun shapes instead of candy. I took my own tofu ice cream to birthday parties and drank water instead of soda. My Easter chocolates were made of carob and when other kids were watching music videos on MTV, I was more likely to be found looking for fairies in the park. My childhood was wonderful, but it was not typical by any stretch of the imagination.

When I started at a new school in 6th Grade, I really wanted to be like the other kids, who primarily came from wealthy and traditional families. I spent many years trying to be “normal” and as a result lost a lot of the innocence that allowed me to see fairies and even recount details of a past life as French royalty. I began shopping at the Gap and matching my t-shirts to my socks. I wore polo shirts and penny loafers and begged my parents to make rules and give me a curfew.

Most teenagers are embarrassed by their parents at some point; however, I had real reasons to be, or so I thought. My mom taught classes on sensuality and traveled the world doing past life regressions to hundreds of people at a time. She wasn’t your typical mom who baked cookies and drove the soccer carpool for sure, though she often did those things. Confessing that my family was weird and owning our differences seemed like a surefire route to non-acceptance at the exclusive private school I attended between 6th and 12th grade, so I became like everyone else and even began to question whether I really had seen fairies and whether reincarnation could really be possible.

Three years ago when I quit my “normal” job and started working closely with my mom, the most remarkable thing happened. What had seemed normal before started to seem kind of weird and what had seemed weird became rather normal. No matter how hard we might try not to, we define ourselves by the people around us. When everyone in my life suddenly was what one might call “weird,” that became my normal. During the two and a half years that I’ve been writing this blog, I’ve watched myself become increasingly comfortable sharing about where I’ve come from. In many ways, I’ve come full circle and am now returning to the person my parents raised me to be.

There’s something liberating about not only not denying your roots, but also welcoming them into your life. The amazing thing is that the more I’ve relinquished my need to be normal, the more the positive response has been from others. The truth is…no one is normal. We’re all weird in our own ways. Most people feel awkward or different at times in their life. However, the more you can be truly genuine and share from the heart, the more people will gravitate to you. This is what I’m learning.

Although I’m still unlikely to announce to my neighbors the myriad ways that I’m “weird,” I accept who I am and where I’ve come from, and as a result, I’m opening the doorway into the magic that life has in store for me.

In what ways are you weird? Do you own this? Even if you don’t, consider finding small ways to share your authentic self with others. It might be hard at first, and some people might not agree with you but in the end, you may discover a miraculous feeling of freedom and joy floods your life. Here’s to welcoming weird! 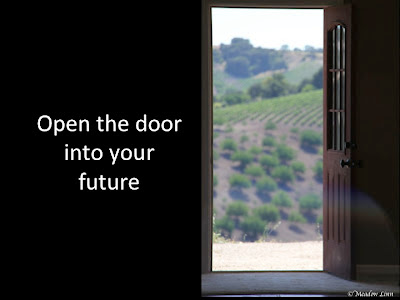 Hijiki with Carrots
A dish for welcoming your true self

One of the advantages of having grown up “weird” was that I was introduced to many different foods as a child, all of which I adored. I learned a deep appreciation for health foods and cuisines from distant lands. Taking nori to school was certainly not hip in the early 1980s like it is now.

I love all forms of seaweed. Hijiki is one of my favorites, and it’s especially delicious with carrots and this soy ginger sauce. Eat alone or serve with steamed rice and grilled fish. This is also a great dish for Halloween to put a healthy spin on the typical orange and black cookies and candies.

In a large bowl, soak the hijiki for 30 minutes, or until soft. Drain and rinse. Peel and shred the carrots. Combine the ingredients for the sauce in a small bowl. Thinly coat the bottom of a large skillet with the vegetable oil and turn to medium-high. When the oil is warm, add the carrots, hijiki, and sauce. Sauté until the carrots are slightly soft and the hijiki is warm. Enjoy! 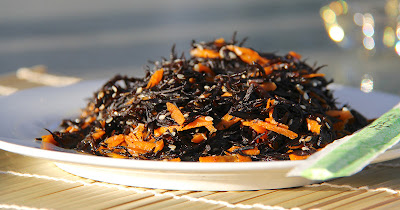 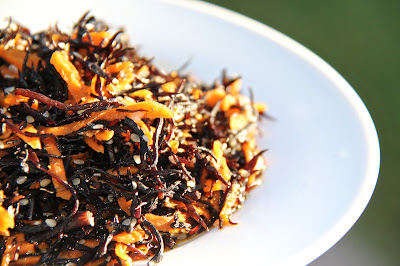