Anticipation ~ Builder of Stress and Heightener of Pleasure 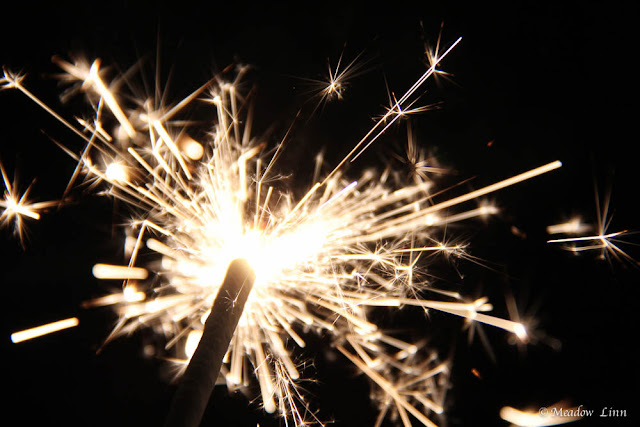 I’m a screamer. I scream on amusement park rides, at haunted houses, and whenever I’m startled. And I don’t mean a little yelp from time to time. No way. When I scream it’s a full on pop-my-eyes-out-of-my-head-show-my-tonsils shriek.

This kind of screaming expels stress and can even increase joy.

Anyone who has ever been on a rollercoaster with me will tell you that I will scream until I’m blue in the face. But, what they don’t know is that the uphill section is often the scariest part for me. Going up in a rollercoaster, I hold my breath, clench my jaw, and repeat over and over again, “oh no oh no oh no!” That’s when my muscles are the tensest and I feel my heart beat the fastest. After so much buildup, screaming on the downhill is a cathartic release and actually…it’s pretty fun.

As the rollercoaster arrives safely at the bottom and eventually comes to a complete stop, that’s when I relax and begin to laugh and joyfully exclaim how exciting it was.

After a recent family trip to Disneyland where I most likely burst the eardrums of aunts, uncles, and cousins, as well as those of a few passersby, I began to think about why we scream and what it is about the uphill that can be so much scarier than the downhill, which for all intents-and-purposes is the scary part, the thrill of the ride. In my pondering, I began to realize how much life resembles an amusement park ride with its ups and downs. Both in life and on a rollercoaster, there’s often a buildup before any potentially stressful or emotionally charged event. However, in life, unfortunately, there often isn’t the opportunity for a cathartic release as there is in the downhill drop of the rollercoaster with the ensuing scream. Perhaps these types of rides are so popular not only because they can be exhilarating, but also because they provide us with a chance to exorcise stress, worry, anxiety, and fear from our bodies in a lighthearted and entertaining way.

Whether it’s the anticipation of something scary, sad, overwhelming, or even exciting, sometimes all the energy goes into the prologue that when the main act arrives, it blows over with little incident. Do you remember the scene in Lewis Carroll’s Through the Looking Glass when the White Queen makes a big fuss about a pinprick that hasn’t yet happened? Once she pokes herself and the blood trickles down her finger, she’s rather nonchalant about the ordeal. She calls it “remembering backwards,” but I think of it more as “anticipation anxiety.”

Just like during the uphill of a rollercoaster, sometimes I have a tendency to build things up in my mind. This, however, can occasionally work to my advantage. For instance, I was so concerned that I wouldn’t be able to finish my master’s thesis on time that I ended up completing it two weeks early. In this case, the anticipation of potentially not succeeding was a useful tool because it kicked my work into high gear. Other times, anticipation can assuage intense emotion. When I was 12 my mom began fretting about the day I would leave home and go to college. With the mere mention of my future departure, she would get teary-eyed. However, when my parents did finally drop me off in a small town in the Berkshires six years later, it was actually my dad who was more emotional. My mom, on the other hand, was like the White Queen with the pinprick.

Although sometimes the side effect of buildup is that the actual event is rendered uneventful—as in the case of the White Queen—anticipation can also heighten our stress or our enjoyment. Often what we're afraid of isn't nearly as bad as we make it out to be in our minds. Sometimes it’s the expectation that an event will be a certain way that wrecks havoc on our wellbeing, not the event itself. For instance, I had some medical tests done recently. Worry pulsed through my veins, but then I realized that until I had the results, concern wouldn’t be productive. So, I relaxed until I knew for sure. And, luckily, the test results came back normal. On the other hand, when I anticipate a great meal rather than eating mindlessly all day, I enjoy it immensely more.

Whether you: 1) remember backwards, 2) remind yourself to wait until there’s something actually worthy of your concern, or 3) scream like hell, here's to releasing worries, fears, and stresses and having fun in the process!

What if rollercoasters were all downhill with none of the uphill? Would we react the same way? Sometimes anticipation is necessary to building excitement. Waiting for these cookies to bake and smelling their heavenly aroma makes that first bite—of warm chocolate mixed with crunchy nuts and chewy oats—even more decadent.

Ever since going gluten free, I’ve been craving a cookie with a cookie-like texture. Many GF cookies are crumbly or overly soft, but these (in my opinion) are perfect. Plus, they have lots of good things in them. Coconut flour is full of fiber and almond meal is packed with protein.

Before starting, make sure all ingredients are at room temperature. 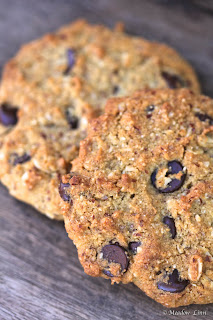 In a medium bowl combine the almond meal, coconut flour, baking soda, and salt. Set aside. In the bowl of a standing mixer fitted with a paddle attachment, blend the melted coconut oil and maple syrup on medium until an emulsion begins to form (I usually have to stick my finger in it to taste it at this point!). Slowly add the eggs and vanilla until fully combined. With the mixer on medium-low, mix in the flour blend. If the dough feels too moist, no fear, coconut flour soaks up lots of liquid. In a few minutes it will begin to firm up. Stir in the shredded coconut, oats, walnuts, and chocolate chips by hand. Use a soupspoon to scoop balls of dough the size of a large ping-pong ball. Roll the dough in your palms and then gently flatten on the baking sheet into a round disc. These cookies will not spread much in the oven, so form them to your liking before baking them. Bake approximately 18 minutes, or until golden. Remove and cool on the baking sheet for a few minutes before transferring to a wire rack to cool completely. 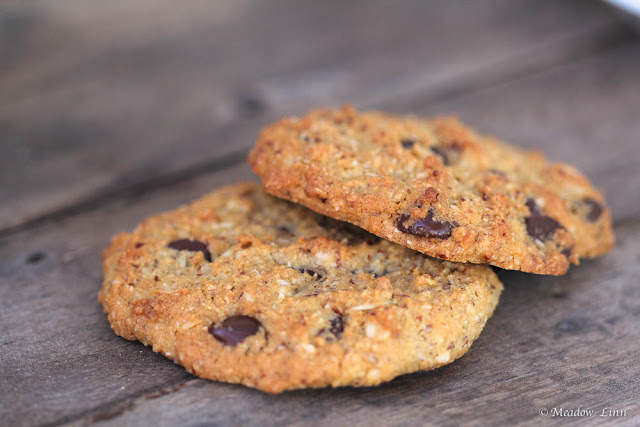 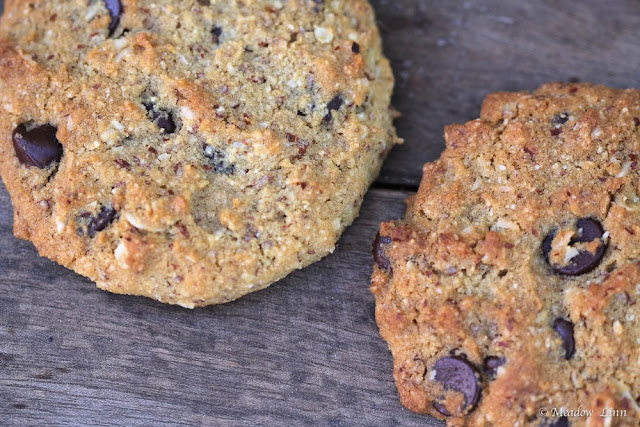