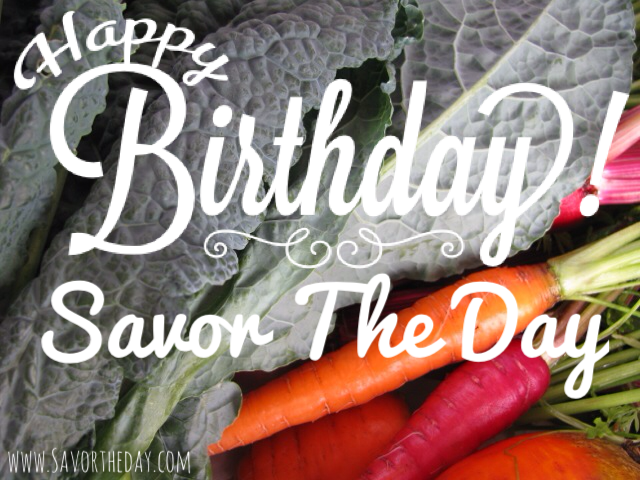 When I was a little girl, my mom taught me to say, “In my reality” when sharing how I felt about a certain event. I imagine it may have sounded strange to onlookers to hear a five-year-old say to a friend, “In my reality, not inviting me to play with you was mean and it hurt my feelings.” But, this expression taught me an important lesson: We each have our own way of viewing the world. In my reality, my friend was intentionally trying to leave me out. But isn’t it also equally possible that she couldn’t invite me over because her mom had a headache?

We often interpret situations based on an emotional response, past experiences, or what others tell us, not always on the facts. As any good television courtroom drama will show us…facts are malleable. Life isn’t black and white. It’s filled with infinite shades of gray.

For my birthday party many years ago, I asked each guest to bring wine. Upon their arrival, I put each bottle in a paper lunch sack and then numbered each bag with a Sharpie marker. As we blindly tasted the wines, we wrote our comments on small scraps of paper. Repeatedly I heard, “Have you tried #23? You have to try it. It’s amazing.” After trying #23, I wrote, “Tastes expensive. Could it be French?” (I’d just returned from graduate school in Paris.) On the other hand, once word got around that #10 was terrible, very few people even bothered to try it. One party guest who tasted #10 described it as “tasting like a salt marsh at low tide.”

At the end of the evening when the bags were removed and the wines were revealed, we were shocked to discover that #10 and #23 were identical. Since we were not experienced tasters, it’s possible that #10 was “off” or “corked;” however, this time I think our estimation of the two bottles had more to do with the way each wine was discussed rather than with the quality of the wine. Since everyone was raving about #23, we expected it to be good. But we expected to dislike #10 because we were told it wasn’t good.

I often think about this party and what it taught me. One of the most practical lessons I learned was the power of description. I used to think that taste alone reigned supreme, but this experience showed me the power of presentation and how it can heighten enjoyment. For example, a picky child is more likely to eat broccoli if you tell him it’s a miniature tree from Sherwood Forest, and an average wine served in crystal and presented with fanfare is going to taste much better than if you were drinking it out of a paper cup on a street corner.

On a deeper level, however, the identical wines deepened my understanding of the many realities that exist all the time. It would have been easy to leave the birthday party before the unveiling, believing, without a doubt, that one wine was superior to the other. But the truth is…they were the same. That is a fact. Yet, each of us fully believed that one wine was delicious and one was horrid and that was our reality.

It can be easy to get sucked into one way of thinking or to see the world in black and white. But who’s to say that my way of viewing an event or a situation is the right way; it’s just simply one possible way. When I remember this, it helps me to better understand people and situations. For instance, in my reality GMOs are harmful, but the scientist working day and night to alleviate world hunger might believe they’re a means to an end. Neither of us will probably ever change our mind—and I’m still certain that I’m right—but understanding that everyone has her own vision of the world can increase compassion.

When you find yourself getting angry, hurt, or sad, try to remember that interpretation can often affect us even more powerfully than facts. What is the truth of the situation? Consider the phrase, “in my reality.” It can help put an event in context and remind you that we each experience everything differently.

Though wine featured prominently at my birthday celebrations in my twenties, as a young child I often requested spaghetti marinara for my special dinner. Up until a few months ago, in my reality, anchovies were not pleasing to my taste buds, but then I tried them again and discovered how delicious they can be.

This puttanesca is a grown up version of my childhood birthday favorite. There are just enough anchovies to deepen the flavors but not so many that there is a strong taste. Traditionally, puttanesca contains olives, but I prefer the simplicity of this particular version without them. 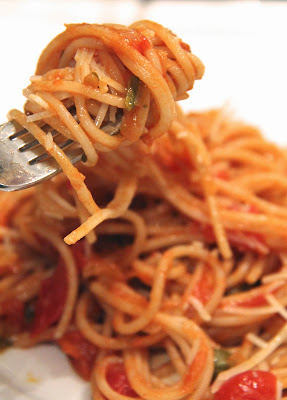 In a saucepan over medium heat, sauté the onion, garlic, olive oil, anchovies, red chili flakes, and oregano until the onions are soft and translucent and beginning to brown, about 10 minutes. The anchovies I use “melt” into the sauce; however, if yours are firmer you may want to chop them.

Add the capers and tomato paste and stir to combine. Mix in the chopped tomatoes and squeeze lemon over them. If you prefer not to have the tomato skins in the sauce, you can cut the whole Romas in half lengthwise and grate the interiors on a box grater to remove the skins. It sounds crazy, but it works! Simmer for 45 minutes, stirring occasionally (every time you stir, add love to the pot). The anchovies and capers add quite a bit of salt, so be sure to taste the sauce before adding salt.

Toss with spaghetti and serve with Parmesan cheese and chopped parsley. 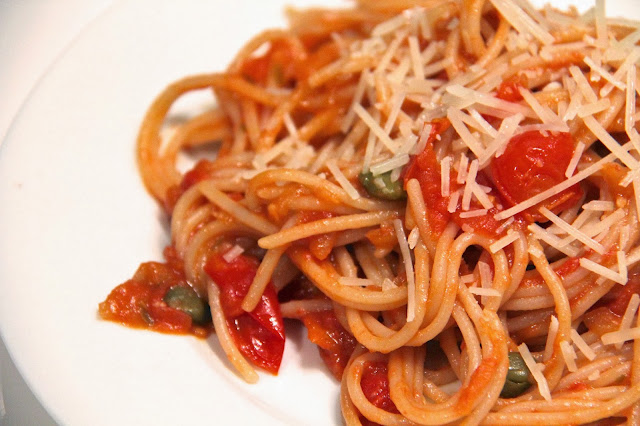