Start at the Beginning 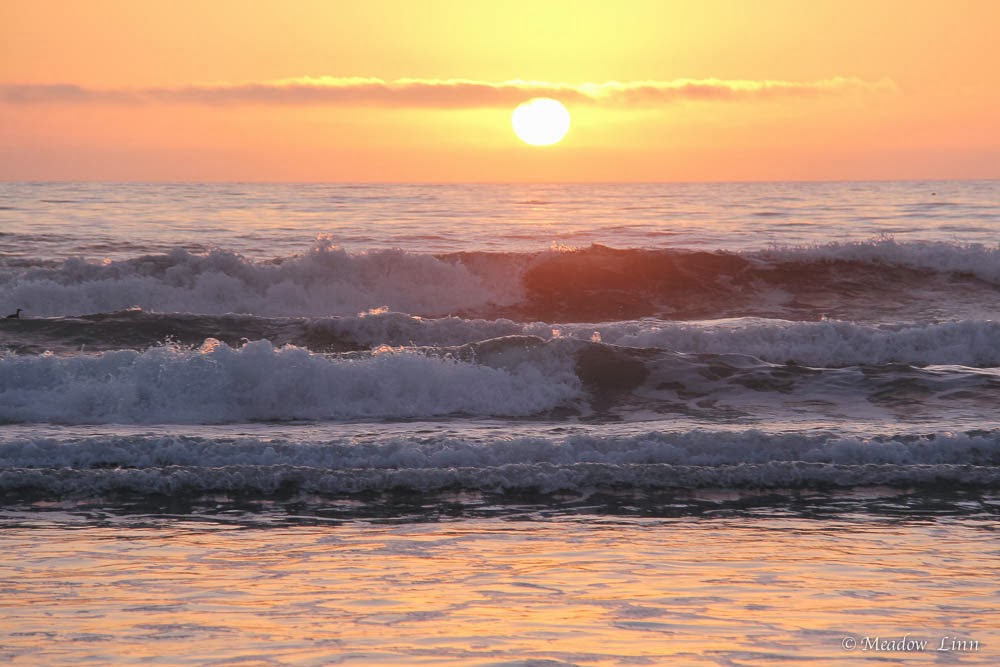 When teaching the children to sing in The Sound of Music, Maria sings, “Let’s start at the very beginning, a very good place to start. When read you begin with ABC. When you sing you begin with Do-Re-Mi.”

Starting with the basics is vital to nearly every endeavor. You wouldn’t expect a newborn to ski like Julia Mancuso or a puppy to sit and stay without being trained, so why is it that we often expect ourselves to instantly be skilled at something we’ve never tried? Do you ever feel as though you have to come out of the gates running when you start something new? Did you know that Colonel Sanders endured 1,000 rejections before finally finding a restaurant interested in his fried chicken recipe?

I’ve been really excited to create videos to demonstrate how to make the recipes found on Savor the Day and show some of my favorite culinary tricks, including Mystic Chef® techniques for infusing joy and intention into everything you eat. In my mind’s eye, I can already see the videos taking shape. Just the thought of explaining how I stir love into a pot of soup or how to extract the most juice from a lime, gets me giddy with anticipation.

However, once I began to read online reviews of wireless microphones, lighting systems, and tripods, my head began to spin. So, instead I watched YouTube videos that explained the tricks of the trade. However, rather than feeling inspired, overwhelm crept in, and I began to feel heaviness building in my chest. Dollar signs danced in my head and worries that I wouldn’t be able to make good videos without a crew pirouetted in and out of my vision. Feeling discouraged, I wanted to give up.

Rome wasn’t built in a day.

Although I have a tendency to want to strive for the Coliseum, I’m learning that sometimes you have to start with a rustic shack and slowly build your way up. Wanting everything to be just right can be paralyzing, but when you realize that sometimes you just have to start, you can liberate yourself from the tyranny of perfection. You can only grow and change if there’s something to grow and change. If you give up before you start, you miss an opportunity to potentially soar.

There are times in your life when it’s important to wait until your wares are perfected. For instance, before getting into an airplane, I want to be pretty darn sure the engineers got it right. However, in many cases, there’s greater power in going for it, rather than waiting until you have the top of the line microphone or the fancy lights that make you look good. There can be value in planting the seeds and watching how they grow and where they take you.

What dream or idea have you given up on because it felt overwhelming? If you’ve been discouraged from a project that’s close to your heart because you felt like you lacked the necessary money, time, or materials, you might consider revisiting it. But this time, try starting at the beginning. What could you do with only a small investment of time or money to take steps toward realizing your dream, idea, or project?

When I first started writing recipes for Savor the Day, I believed I needed to reinvent the wheel. I thought people would only be interested if I created complex and completely new dishes. When the recipes required too many steps or were utter failures, I’d want to give up. But then I realized…I could share the food I love. In a sense, this was my way of “starting at the beginning.”

Winter Slaw is my current favorite salad. I’ve been eating it about three times a week since I first created it. You can buy these vegetables pre-cut in a bag at Trader Joe’s, but if you have the time, I recommend slicing them yourself. They will be fresher and more nutrient-rich. Slice extra vegetables, and keep them in the fridge for quick and delicious salads and stir-fries all week. As an alternative to Winter Slaw, omit the Parmesan, cranberries, and nuts, and dress with a sesame-ginger vinaigrette for a delicious Asian slaw. Or, stir-fry the vegetables in a bit of coconut oil, tamari, and lemon juice for a quick weeknight stir-fry.

I prefer to slice the vegetables by hand. I think it looks prettier, and it’s a great way to focus your love and intention into the food.  However, a food processor can be a handy tool in slicing some of these vegetables. Use either a box grater or a food processor fitted with a grating disc for the broccoli stems.

Combine the Brussels sprouts, grated broccoli, green and purple cabbage, and kale in a large salad bowl. Toss with the cranberries, pecans (or walnuts), and Parmesan cheese. Dress with olive oil and balsamic and add salt and cracked black pepper to taste. 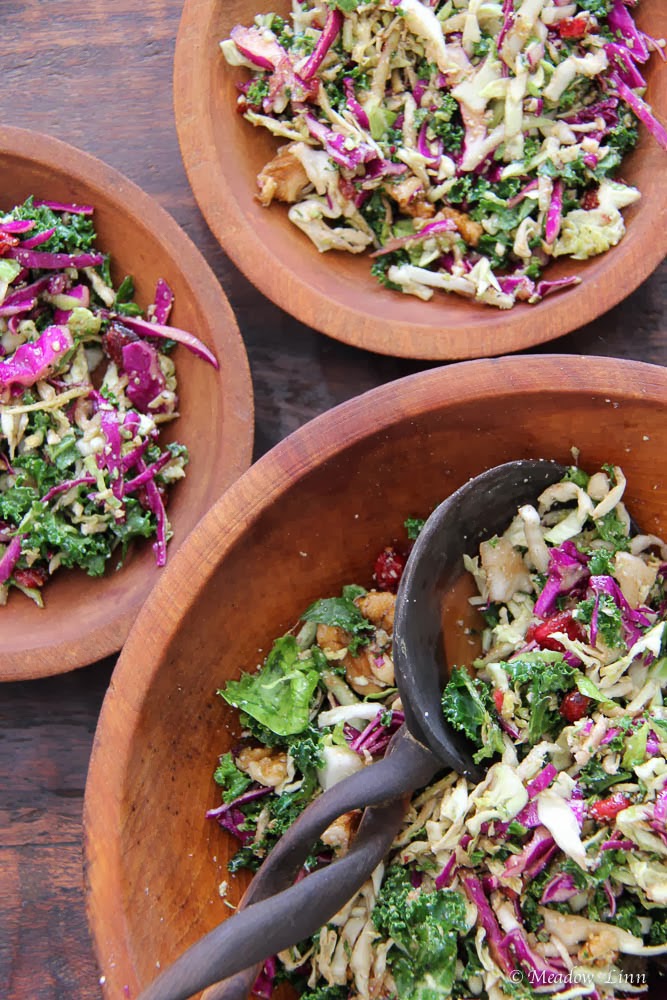 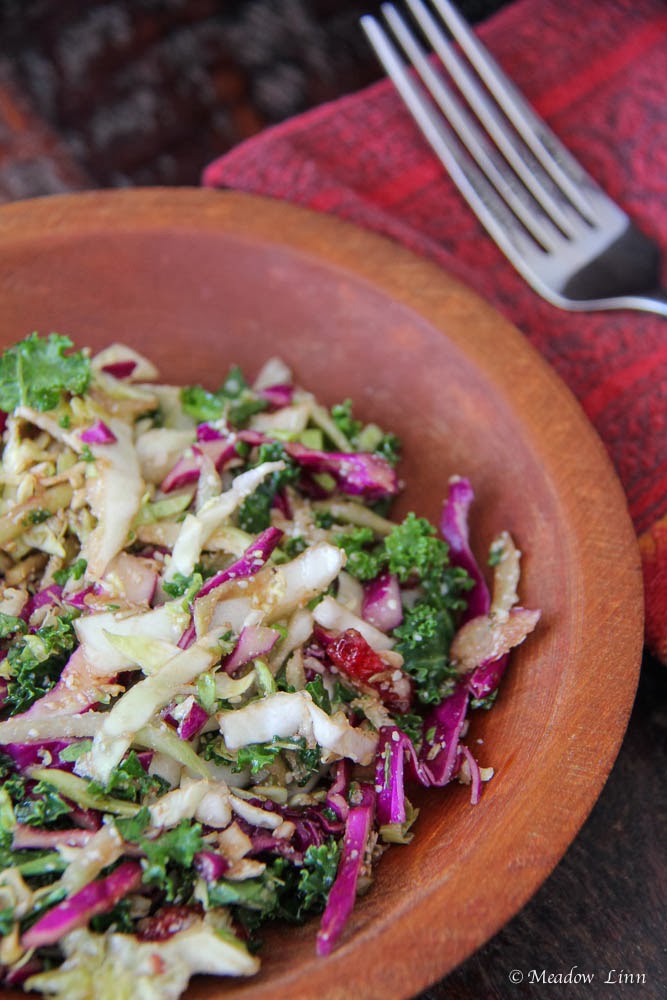 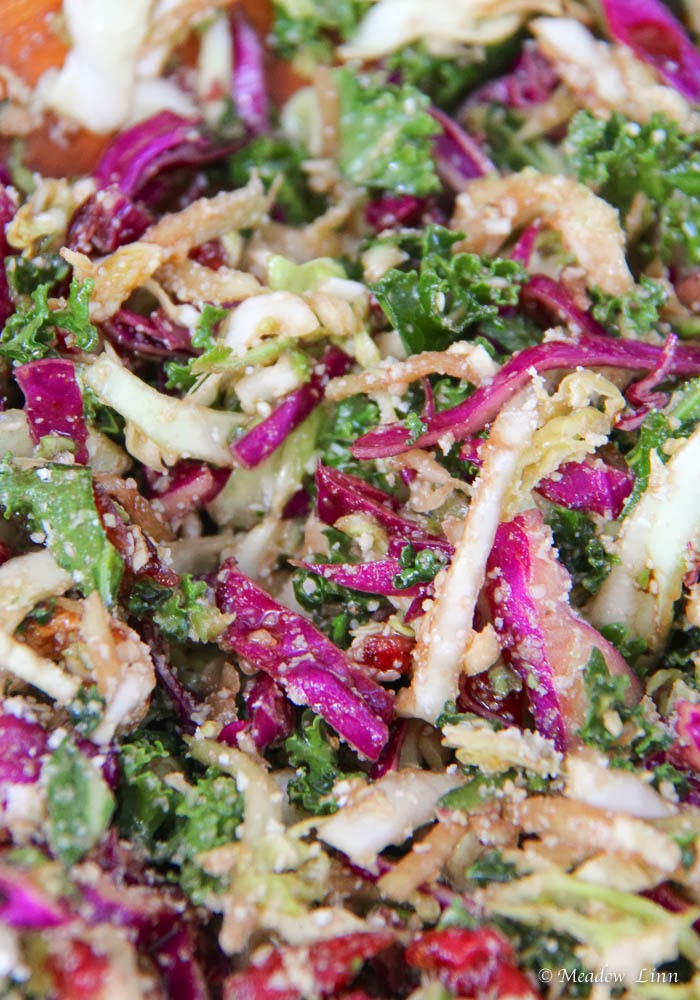