Dream Big: Allow for the Limitless Possibility of Your Own Potential 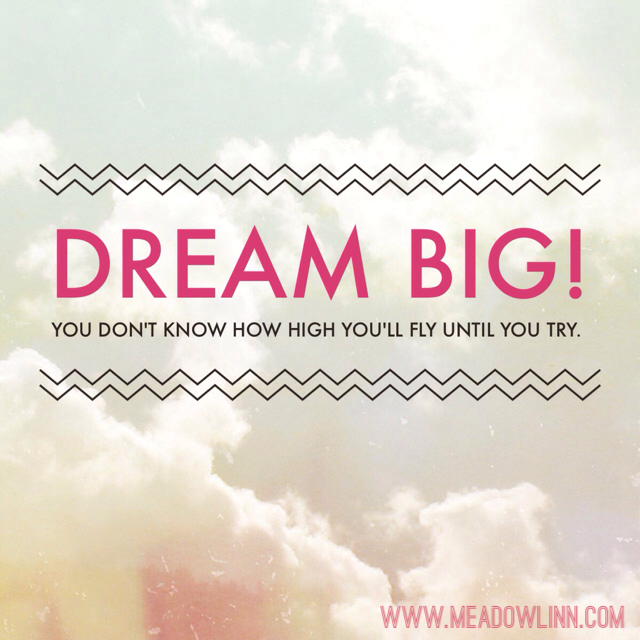 Are you playing small? Are you dreaming big enough to reach your fullest potential? What if Oprah had only dreamed of an afternoon book club with her closest friends? What if Steve Jobs had never believed in the possibility of a handheld device that could connect us with the world? And, what if Gandhi had only hoped for friendship among a few people?

What could you do? Who could you become? And what gifts could you share with the world if you allowed for the limitless possibility of your own potential? 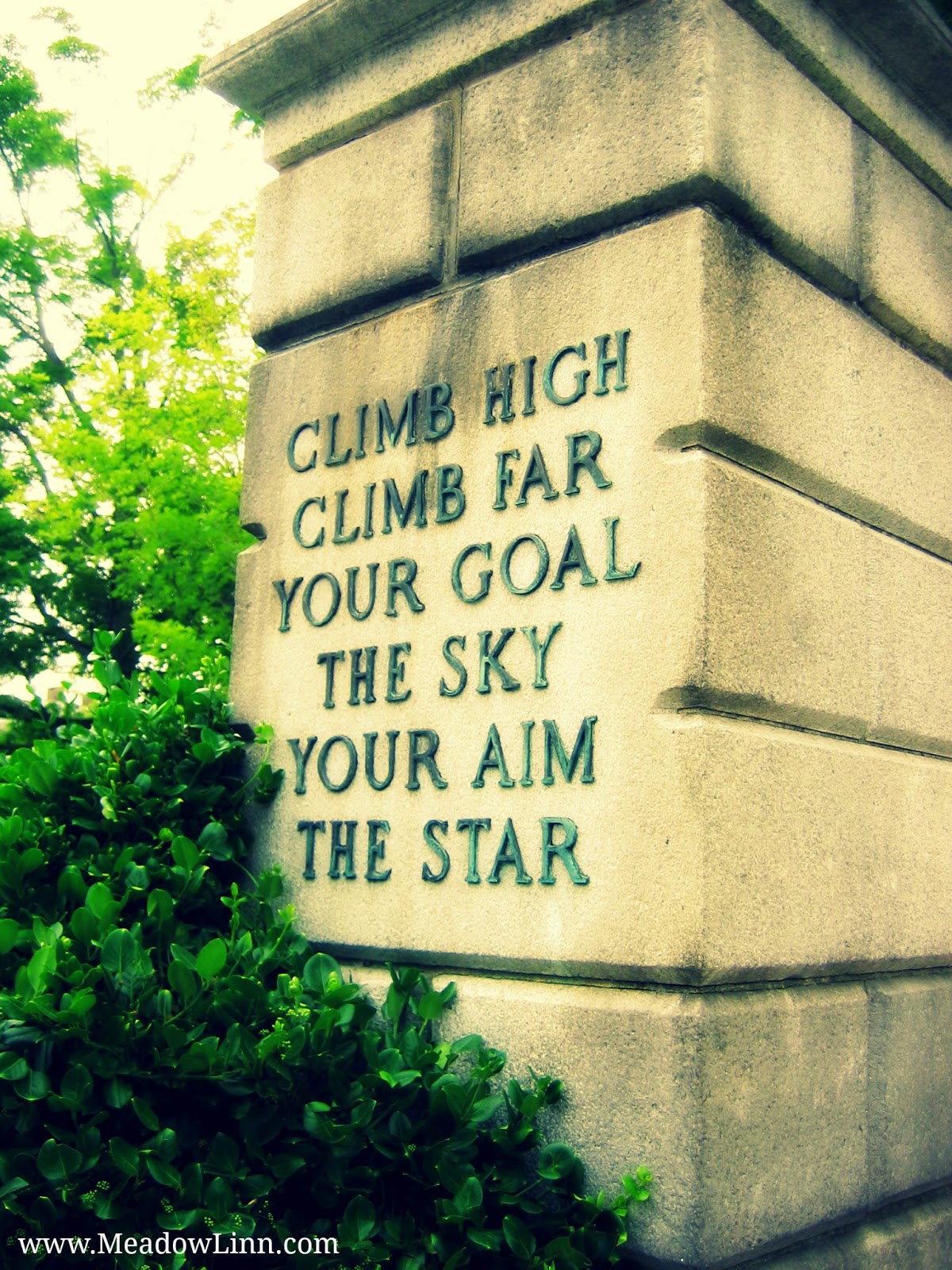 Dream big. Before my trip to Asheville, I spent hours pouring over real estate listings online. It was a fun way to get a better feel for the area and see if it would be somewhere I might eventually want to call home. One of the houses in particular caught my eye. So, when I was there, I did a drive-by of my “dream house.” I’d chosen it because it had space for a garden and was reasonably priced (though still more than I could afford at this time). In reality, the tiny bungalow was wedged within a dark canyon and situated underneath a freeway. Everything about it made me feel small.   It was, however, a powerful moment. I nearly laughed when I saw the house. Why was I dreaming so small? Since I’m not in the market for a new house at this very moment, why not dream big? Why not envision myself in the most beautiful and expansive feeling house on the most sought-after street?

Be creative. Be big. Be bold. Be brave. If you could do, be, or have absolutely anything, what would it be? Maybe the thing that would bring you the most joy is something that you can’t even begin to imagine yet because it’s so far out of your current realm. That’s okay. Dream it up anyway. There’s a possibility your dreams won’t come to fruition in the exact way you imagine them; yet, there’s a 100% chance they won’t come true if you don’t try. 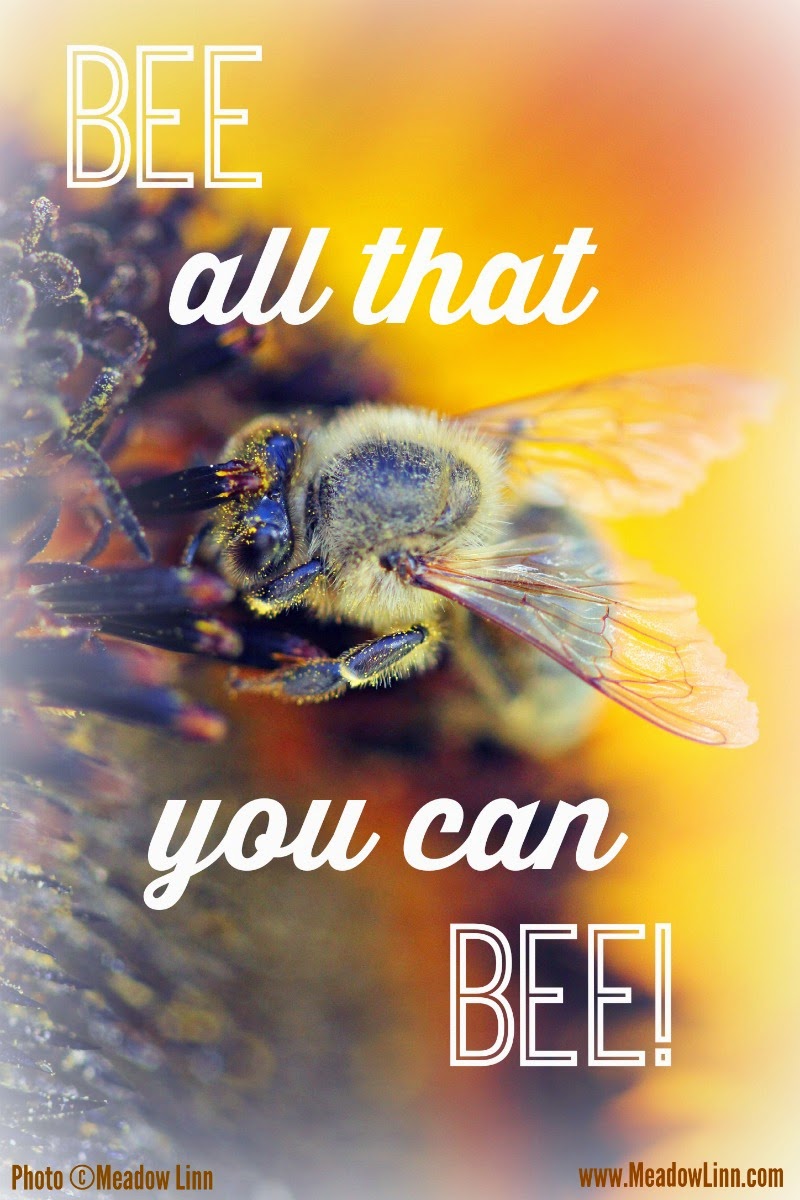 Dreams need to be specific. In my bedroom I have a wooden box (called a “Miracle Box”) where I place slips of paper with my desires. These statements, I’m now realizing, are rather general and as a result they’re languishing. They say things like, “I am in love,” “I have happy children,” and “I have enough money to travel.” A few years ago I included a picture of my dream car, a silver Subaru Outback. The color didn’t really matter to me, but it mattered to the Universe. Of all these desires in the box, guess which one came to fruition? The car, of course! This happened because I was really specific about this dream. I didn’t just say, “I have a nice car,” I specified exactly what kind. Not only do I now have the Outback, but also it’s the same color as the one in the photo.

Take steps toward realizing your dreams. Recently I saw a Facebook post from that said, “There is nothing standing between you and your dreams. Take the first step.” It’s important not only to dream big, but also to take steps toward making those dreams come true. We don’t simply wish something to happen and then it appears. The car didn’t just magically show up on my doorstep. I saved. I planned. I researched. I actively manifested this dream to fruition. We need to be intimately involved in consciously creating our own life. 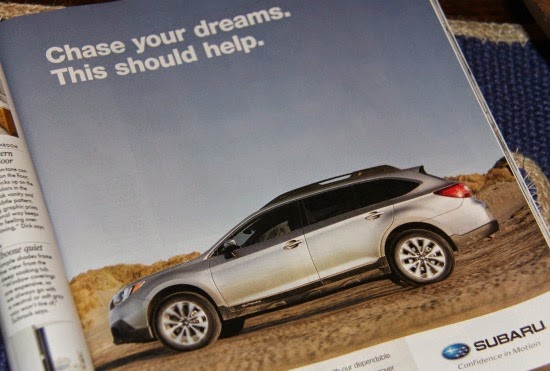 Even if it’s scary, take action. Working toward your dreams can be an exciting process, but also it can be daunting. The other day, while feeling overwhelmed by the enormity of chasing my big dream of publishing a second book, I opened a magazine to escape for a few minutes. What a surprise it was to “randomly” flip to a Subaru advertisement that said, “Chase your dreams.” The car in the ad was the exact make, model, and color as the car I manifested a few years ago! Even if failure feels inevitable, keep going. When I first put the car in my Miracle Box I had never before purchased a car, let alone a new one.

Be grateful. If you approach your dreams from a place of everyone-else-has-what-I-want-poor-me, you’re going to have a difficult time reaching the stars. But if you’re grateful for what you already have and create an action plan to move into a state of even more joy and love, there’s a greater chance this will happen. Celebrate every triumph, no matter how small, because you’re making progress. 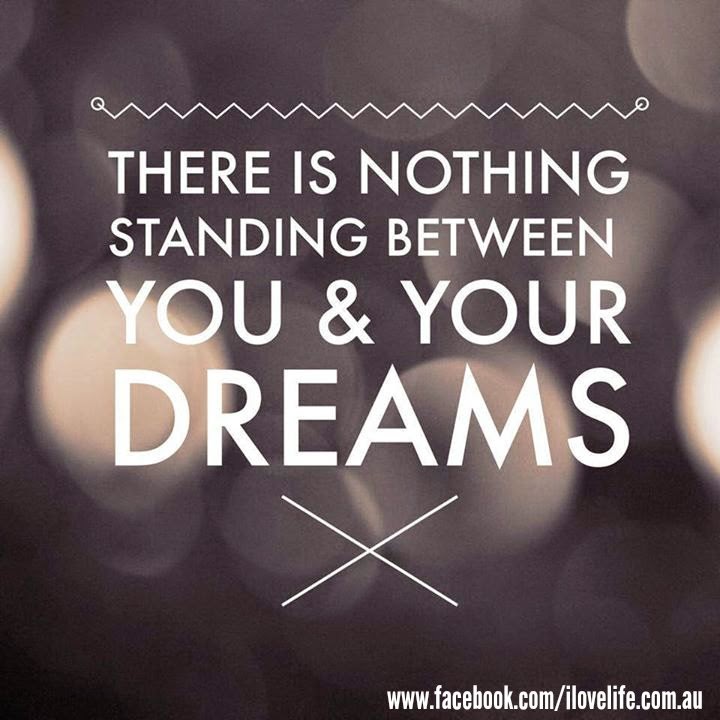 Here’s to big dreams! Spread your wings and fly. Before you know it, you’ll be soaring into your greatest potential. 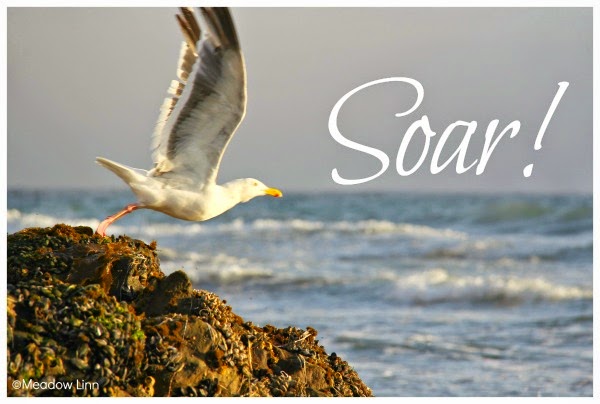 I named this soup “Shoot for the Stars” because it’s so easy to make; yet, when topped with the pears and pomegranate, it looks like something you’d be served in an elegant restaurant. Dreaming big (and eating well) need not be difficult or complicated. The journey can be simple and delicious. 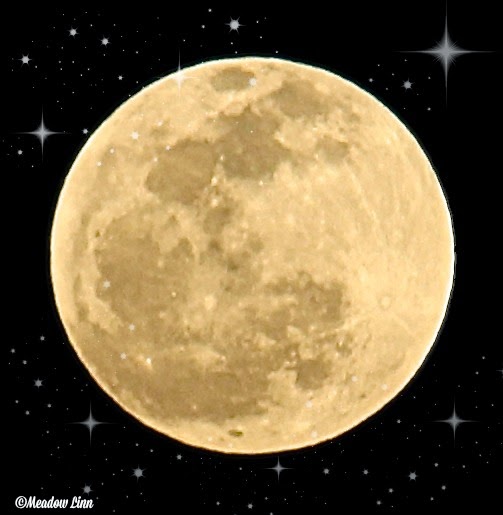 Put the cauliflower florets and chunks of pear into a roasting pan lined with parchment paper. Drizzle 3 Tbsp. of the olive oil over the cauliflower, and sprinkle with the cracked pepper and ½ tsp. of the salt. Using clean hands, toss the cauliflower until the oil is evenly distributed. Roast in the oven until the edges of the cauliflower are caramelized and the centers are soft, about 30 minutes.

While the onions sauté, peel, core, and cut the firm bosc pear into tiny cubes. In a small frying pan, heat the maple syrup over medium heat. Simmer for about four minutes, until thick syrup is formed. Remove from the heat, add the pear cubes to the pan, and gently toss until fully coated. Set aside.

Remove the cauliflower from the oven and add to the soup pot. Pour in the water and mix in the lemon juice. Bring to a boil, then reduce heat and simmer for 5-10 minutes to give the flavors time to marry. Turn off the heat. Purée the soup using an immersion blender or a blender on medium speed.

To serve, top with a sprinkling of pomegranate seeds, chopped chives, and maple pear “croutons.” 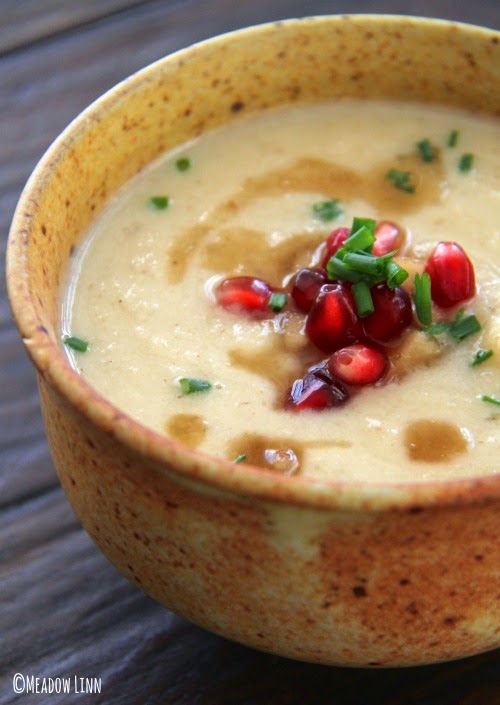