Are Angels Protecting You? 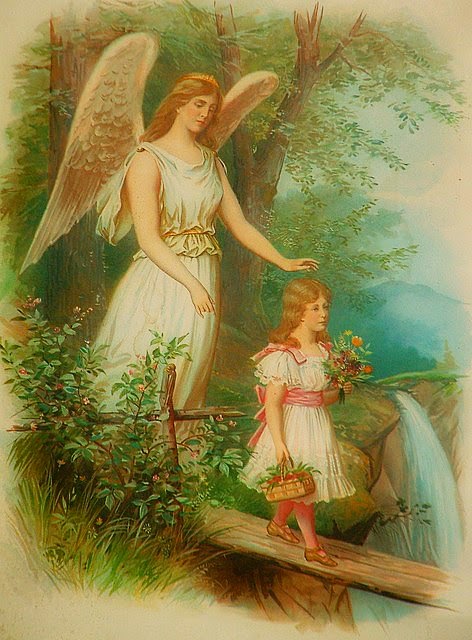 Ever since I can remember, my mom has surrounded our car with angels. I vaguely remember her repeating her angel mantra (angels in front, behind, etc.) when I was a little girl, but it became a daily practice once I turned sixteen and got my driver’s license. I used to roll my eyes and groan, but over the years it has become as second nature to me as fastening my seatbelt. Actually, it’s become so ingrained that even when I’m in an airplane I can’t help but imagine the jet being lifted by angel wings. And, over the years, we’ve been well protected.

So, you can imagine my dismay last month when I heard a loud crunch as a woman drove her car into the back end of my Subaru in a grocery store parking lot. Luckily, neither of us was hurt, only my sweet car, which had to get a completely new bumper. After examining the damage and swapping insurance information, I got back in my car and took a deep breath. How could the angels have let me down? I thought they were supposed to protect me…and my car. Why weren’t you in front, behind, above, below, to the right, and to the left?!!! I wanted to shout. 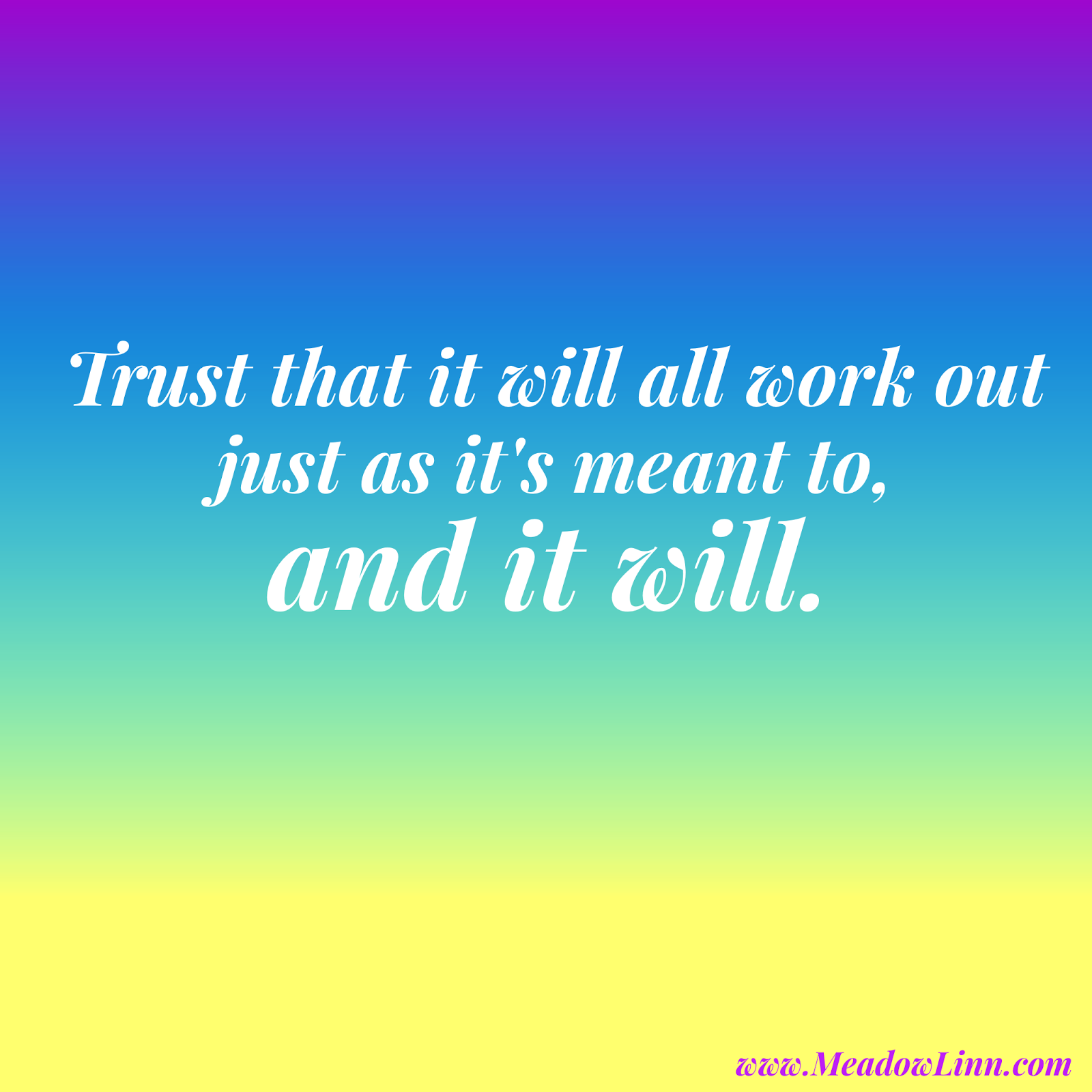 But then I had an idea. Maybe they were protecting me after all. I wasn’t hurt and neither was the other woman. The event would prove to be expensive, but the damage wasn’t serious. I started to wonder if the gouged bumper was a small price to pay. Maybe the angels were actually surrounding my car, and they had a greater plan in mind. What if they had detained me in the parking lot for a reason? Perhaps there would have been a pile up on the freeway. Or, maybe deer on the twisty canyon road and I would have had to swerve to avoid. Sure, it was likely just an unfortunate fender bender. But, since I would never know the myriad of possible outcomes had I left the grocery store earlier, later, or had I not shopped at all, instead of blaming the angels for not protecting me, why not thank them for keeping me safe. I could choose to be angry or I could choose to be grateful. Gratitude feels a lot better than anger, so I decided to choose to believe that the angels were protecting me and accept that I would never know the full story. 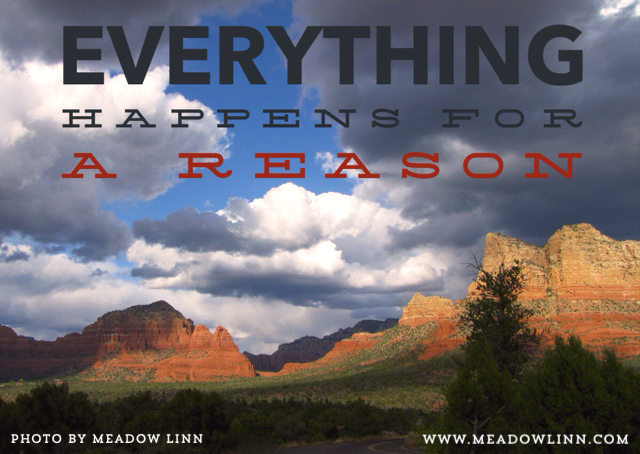 Sometimes, as the expression goes, “shit happens,” for apparently no good reason at all. Though, when we believe that everything happens for a reason, it can change our outlook, not just on tragedies, but also on daily annoyances. A few months ago I got caught in a traffic jam and had to sit at a standstill, with no possibility of exiting the freeway, for an hour and half. Boredom, fatigue, and hunger blew through the car like an unwelcome arctic wind. I’d just flown across the country, rented a car, and was only two hours into my four-hour drive to Asheville. It was dark. I didn’t know where I was. And, I just wanted a warm meal and a soft bed. However, I subdued my irritation by telling myself that everything happens for a reason. I would likely never learn why, but believing that there was a reason made the delay feel more like an adventure rather than a roadblock to my destination. And, who’s to say that the angels didn’t put me in that traffic jam to shield me from something or simply to give me an opportunity to ponder the nature of their greater plan?

Often in life you have to take things on faith. It’s up to you to choose the story that brings you the most joy, solace, and peace. At times maybe that means blaming the angels for misfortune or accepting that sometimes bad things happen, but other times maybe that means deciding that whatever has befallen you is part of a greater design. Since you may never know the reason, choose the path that makes you feel the most uplifted.

If angels ate human food, this is what I would imagine them eating. Although I don’t eat a lot of desserts, sometimes I want a little sweet treat, and this hits the spot.

*You can also use coconut sugar, though it will change the flavor of the pudding.

In a medium pot, combine the coconut milk, water, evaporated cane juice/organic sugar, salt, and arrowroot powder. Heat the coconute mixture on medium heat, stirring frequently, until a gentle boil is reached, approximately 15-20 minutes. While whisking, imagine your love and gratitude for the angels flowing from your heart and into the pot. As you stir, say (and mean it):

I am protected
I am loved
I am guided
Thank you

Once a gentle boil is reached, whisk constantly until the pudding begins to thicken, about a minute. It should be approximately the consistency of pancake batter. Remove from the heat and whisk in the vanilla.
Divide between 4 dessert cups, or pour into one large bowl. Chill until set, about four hours.

To serve, top each serving with half a sliced banana and sprinkle with shredded coconut. 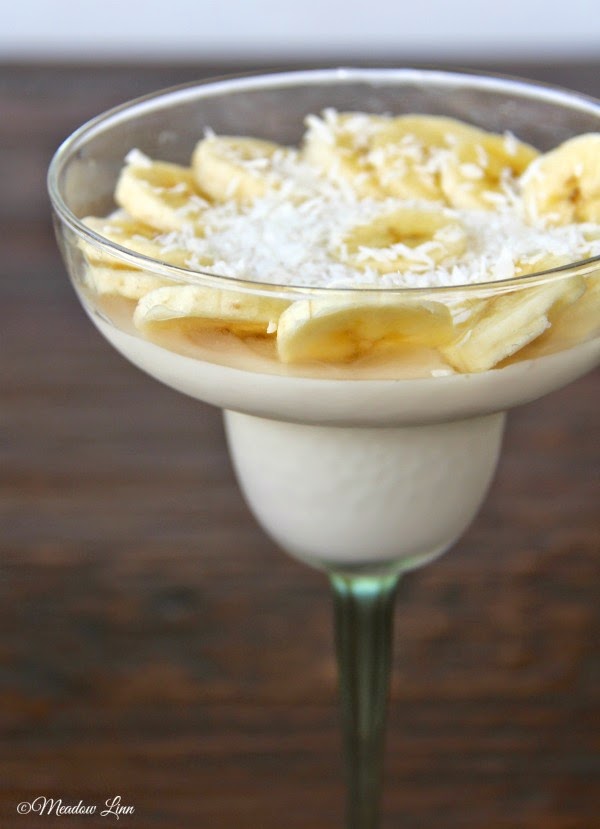 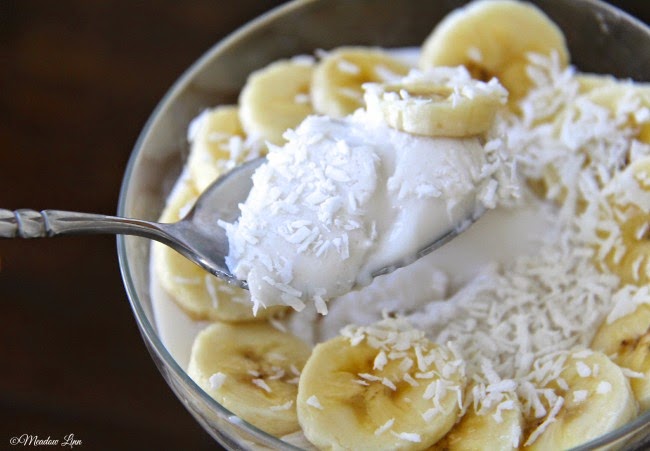