Getting What You Need, Not Always What You Want 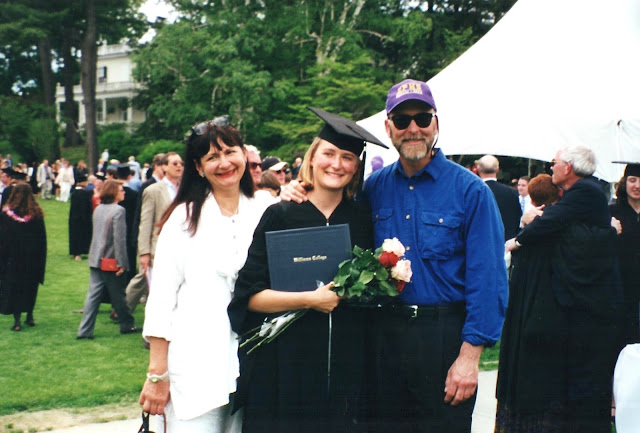 What in your life is exactly as you planned? What is completely different?

Exactly 15 years ago, I graduated from college. Never in a million years would that 22 year-old have imagined my present life. She would’ve fallen out of her chair laughing if you’d told her she’d be missing the 15-year reunion because she’d be speaking about spirituality on a conference-at-sea in Alaska. There’s no way! That pearl-wearing, Camus-reading girl would’ve thought you were making it up.

Like most teens, I’d made a big point of going in a different direction from my parents. The idea that I’d end up doing similar work to my mom would’ve seemed completely outlandish. And if you’d told me I’d be making arrangements for someone to take care of my chickens while I was away, rather than my husband and children, I’d have really been floored. What?! Thirty seven and still single?! Chickens?

It’s rare that we end up doing what we think we’ll do. Each step puts us on a slightly different trajectory. And, as we get older, we grow and change, and our priorities change as we become increasingly more ourselves. Many years ago I had a boyfriend who dreamed of taking up residence on a tropical beach where he could fish all day. At the time, that sounded horrible to me. I was in strive, strive, strive mode. But, now…well, that sounds pretty nice. Things change.

Every once in a while we may encounter someone who’s known since they were little exactly who and what they wanted to be, and they’ve followed that path into adulthood without deviating. However, most of us, for better or worse, end up somewhere very different from where we set out to go. A good friend of mine from college decided to be a stay-at-home mom after completing her medical residency. Someone else I know planned to travel the world and never get married, but she fell in love and built a life in her hometown, and she loves it. Neither of these women would have guessed that this would be their life, and they couldn’t have planned for this turn of events, but it has worked out.

Although my current life is different from what I imagined when I graduated college, I’ve had some extraordinary experiences that I couldn’t have even dreamed of back then. I thought I was destined for a high-powered and/or academic career, but the reason that didn’t come to fruition is that it wouldn’t have been the right path for me. Though I used to like to think of myself as a type A personality, I’m not really that way. Being creative and savoring life’s pleasures is much more my style, but it took me a while to find my way back home.

As much as I want to get married and have a family, I also know that if I’d met and married a man years ago, it wouldn’t have been the right time. I was still figuring out who I am and where I’m going. And if I’d had children when I wanted, likely I wouldn’t have taken the risks (like quitting my job) that have played an integral role in bringing me to myself. So, in the words of the Rolling Stones, “You can’t always get what you want. But if you try sometime, you just might find you get what you need.” I didn’t get what I thought I wanted when I left college 15 years ago, but I got exactly what I needed. And for that, I am truly grateful.

When in your life did you get what you needed instead of what you wanted? In what ways has this shaped who you are? Although it can feel antithetical to moving forward, as often as you can, take time to be grateful for all the missed turns in your life, because they may have actually been keeping you on your true path. It’s easy to feel regret. Gratitude can be much harder, but the things we regret are often the things that helped shape us and make us who we are today.

There have been a number of times in my life when my health has given me what I needed and not what I wanted. Although often frustrating or even devastating, the end result has always been for the better. Getting diagnosed with gluten and casein intolerance nearly five years ago was a huge blow, but it’s been a blessing in many ways. Not only do I feel stronger and more vital, but also I’ve become more sensitive to other’s dietary needs. A friend, who’s in the process of figuring out what foods work best for her body, recently introduced me to grain-free granola. I thought, I can make that! And so after a number of test-batches, here it is. The only problem…I can’t stop eating it. It’s pretty decadent. It makes a wonderful breakfast with fresh blueberries and homemade almond milk (or yogurt, milk, or other milk alternative), but also it’s rich enough to be eaten like a cookie or granola bar. Enjoy!

Notes: Do not use store-bought flax meal. You will get more nutrients from grinding your own. Plus, pre-ground flax can go rancid quickly. 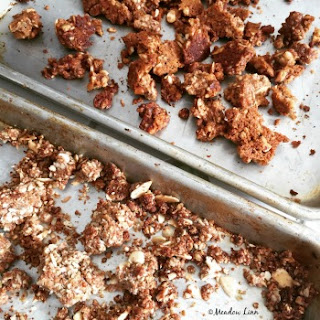 Put the flax seeds in the bowl of a food processor and process until they are a fine meal (flour), about 3-4 minutes. Remove from the food processor and put in a large bowl (The bowl should be large enough for all of the granola ingredients as you will eventually mix everything together in it). Put the walnuts and pecans in the food processor and pulse to chop the nuts into pea-size pieces. Remove and add to the bowl with the flax meal. Put the sunflower and pumpkin seeds in the food processor and pulse to chop into small pieces. Remove and add to the bowl with the nuts and flax. Add the sliced almonds, almond meal, coconut, cinnamon, and salt to the bowl and stir to combine. Wipe out the food processor and fill it with the coconut oil, honey, and vanilla. Process until creamy and syrupy, about a minute. Pour into the bowl with the nuts and seeds and stir until fully combined. Spread the mixture evenly onto a large baking sheet and bake until golden brown, approximately 25 minutes. Halfway through, use a metal spatula to turn the granola so it browns evenly. Do not stir. Instead, flip it like a pancake. This will help keep the clusters together. After approximately 25 minutes, remove from the oven and cool on the pan. It will become crisper and firmer as it cools so don’t despair if it seems a bit soft when you remove it from the oven. Once cool, toss with the cranberries (if using), and store in an air-tight container. 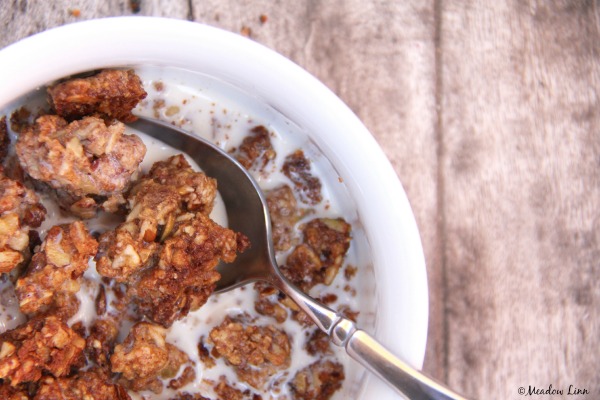 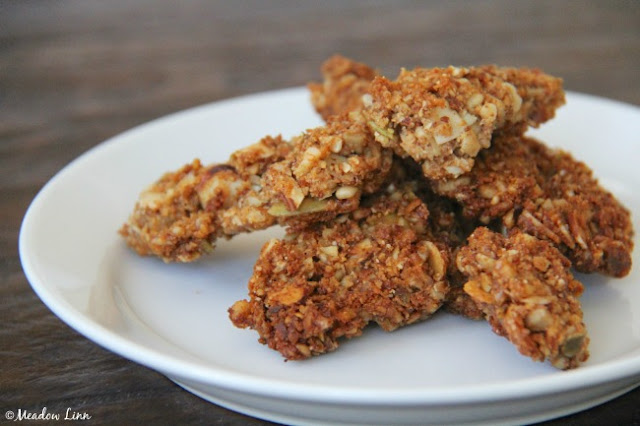