Things Fall Apart So They Can Fall into Place 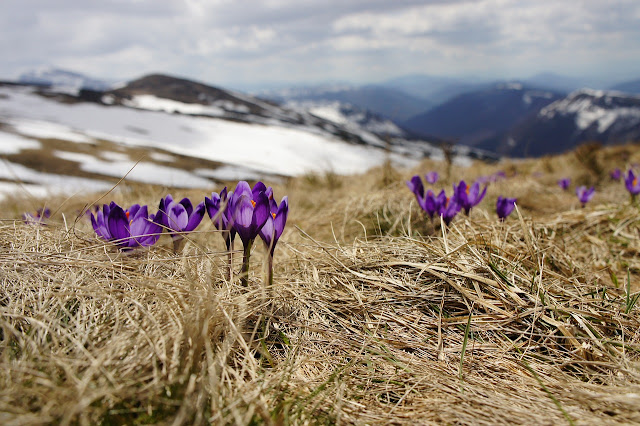 There would be no spring without winter. In the cold darkness when everything is dormant, the barren snow-covered fields and denuded trees may look lifeless, but in fact, under the surface they are making way for spring’s renewal. In this continuous cycle, death and rebirth ebb and flow like the ocean tide. What may appear to be the end is actually the beginning. When the land lays fallow, it rests and replenishes itself. The decaying leaves nourish the soil, making way for the resurgence of life that will sprout into being as the days grow longer.

Often in life when things seem to be falling apart, they are actually falling into place. When you’re in the middle of tragedy, catastrophe, turmoil, or change it can often be impossible to see how endings can give rise to beginnings, but that’s exactly what happens. Although forest fires can be very destructive—especially those that are caused by human negligence and those that happen near homes—in nature fire is necessary to the cycle of life. The jack pine, for instance, can only sprout after its seeds have been exposed to the intense heat of the fire.

Perhaps you’re currently being pushed to your limits, your own personal fire. But, what if this “fire” that you’re experiencing is the catalyst that will catapult you into the next phase of your life? Like the jack pine, it’s possible that this time of hardship is the very thing necessary to break you out of your shell and allow you to sprout and flourish into your full majesty. Like the phoenix that rises from the ashes, you will grow even more into whom you are meant to be as a result of weathering the storm.

On August 20th my grandfather passed away suddenly after a short illness. Just a few months ago he was a strong and vital 88-year-old who did his own roof repairs. It happened so fast that I’m still having difficulty grasping that he’s really gone. But, I’m grateful that I got to see him one final time. I was able to show him photos from my recent road trip to the Canadian Rockies (he loved road trips!) and ask him about some of the crafts he’d made over the years. I brushed his hair, which is something I would have never been able to do before his illness, as he was not a particularly touchy feely kind of guy. But, the action felt sweet, and something I will always remember.

At the same time my grandfather was declining, the house I live in sold. (As I type this I’m surrounded by bubble wrap and moving boxes.) I have just one week to put everything in storage, as I do not yet know where I’m moving. Like my grandfather’s passing, this also happened very quickly. While I look for a new place to live, my dog, cats, chickens and I will be moving in with my parents until their house, which is also on the market, sells. I usually have a plan, which makes this all the more frightening, but also oddly liberating.

Additionally, while I’ve been growing my Mystic Chef® community, I’ve been working for my mom, which has provided a stable income, but it’s time for me to fully step out on my own, which is exciting but also scary. There will be nothing to fall back on other than my own creativity and resourcefulness.

The things that have helped to create my identity, my home and my work, are being stripped away. However, what I’m left with will be the building blocks for the future that I will create.

Although some days my pulse quickens under the weight of it all, I also know that this is part of the cycle of life. Though it may feel like everything is falling apart, it’s also coming together in miraculous ways. I am scared, but I’m also immensely excited. I feel like the jack pine torched by fire on the brink of sprouting.

If you’re going through a hard time or if it feels as though everything is falling apart, know that this is part of the process. You will make it to the other side, and you will be at the beginning of something new and magnificent. 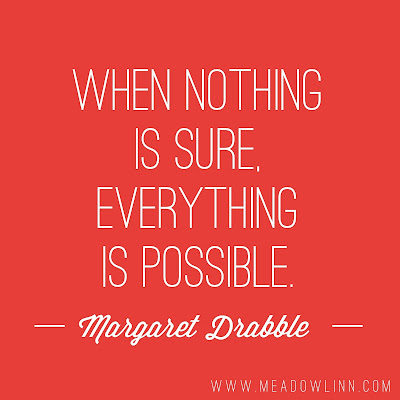 My grandfather first introduced me to the joys of growing vegetables. As I approach the final days in my home, harvesting juicy tomatoes in my garden is bittersweet. It may be a long time before I’ll be able to have such a bountiful garden again. Wanting to savor this season’s harvest, I’ve been making this raw pasta sauce all week. To me, it’s the epitome of late summer.

This is best made with heirloom tomatoes (the more colorful the better!); however, you can also use conventional tomatoes. The first time I saw someone peel a tomato I was about nine years old. Before slicing my grandpa’s homegrown tomatoes, my grandma always peeled them. To me, it seemed like an awful lot of work, and to this day I rarely peel tomatoes. For this recipe, however, I make an exception because the skins of heirloom tomatoes tend to be thick. If your heirlooms are ripe (but not squishy), the peel should come off pretty easily with a paring knife.

Peel the tomatoes. Dice them and put them in a large bowl. Pour off the liquid*. Mix in the minced garlic, olive oil, and salt. Stir in the balsamic vinegar and olives (if using). With intention, drizzle love over the entire bowl, and stir in hopes and dreams. Add three pinches of excitement for the future and blend until fully combined.

Don’t worry if the sauce seems liquidy (heirloom tomatoes expel a lot of water). The hot pasta will absorb some of the liquid. Let sit for approximately 30 minutes to allow the flavors to marry. This is a good time to start making the pasta.

Toss the sauce with 1 pound hot pasta (I use a brown rice/quinoa spaghetti, and I do not rinse it).

*Tomato water is a delicious and healthful tonic. Save the liquid you pour off and enjoy it on ice (or use it as a base for a light and refreshing virgin bloody mary). 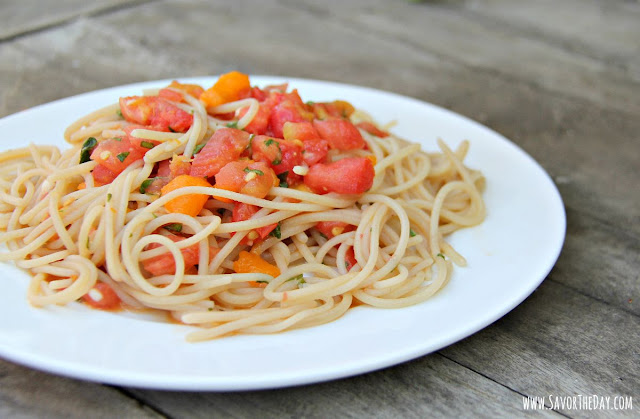 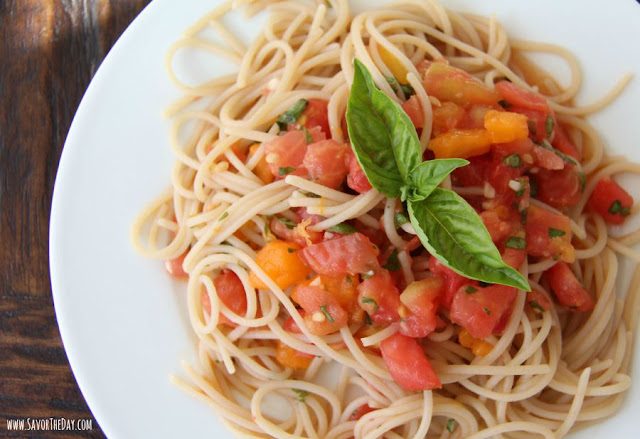