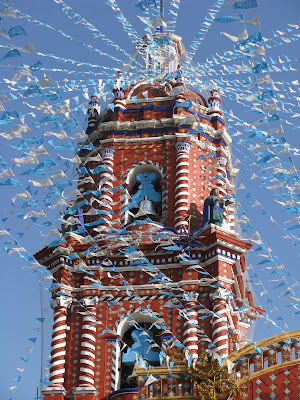 “So, let me get this straight…you’re going to learn how to make a burrito?” the drunk man at the wine bar derisively responded when I told him I was going to be studying Mexican cooking. Even in California where the population is about one quarter Mexican, there is still a lot of ignorance about what is truly Mexican food. What we consider a burrito—a massive flour tortilla overflowing with rice, beans, meat, and lots and lots of cheese—is most likely an American construct. In the United States, when we think of Mexican food, we generally imagine a plate of melted cheese and an hour or two of heartburn. 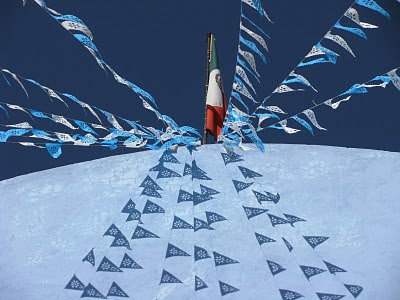 When I was a kid we occasionally went to a Mexican restaurant that specialized in melted orange cheese. For some reason—though lactose intolerant—I always ordered a cheese enchilada, which was smothered by a thick blanket of melted cheese and only distinguishable by a gently sloping bump beneath the orange mass. Believe it or not, cheese actually is not very common in traditional Mexican cooking. Wanting to learn more about the cuisine of Mexico, I packed my bags earlier this month and headed to the city of Puebla for a cooking course at Mesones Sacristia de la Compania. 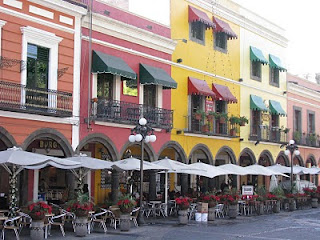 Having had so much fun learning to cook traditional dishes in the colonial city of Puebla, I returned home with a suitcase full of chiles (carefully hidden beneath a pile of clothes) and armed with recipes and ideas to create a Mexican feast for Christmas dinner. Although the following recipes are from the holiday meal I shared with my family, they can and should be enjoyed year round. Viva!

Mole is one of my all time favorite dishes, and though the recipe list for some moles can be intimidating, it doesn’t have to be. Preparing Mole Poblano makes me feel like a mad scientist or one of the witches from Macbeth: eye of newt, chopped chocolate, dried chiles, fried and dried fruit, and burnt tortilla, boil boil toil and trouble, but that’s what makes it so much fun (and delicious)!

As you become familiar with this recipe, try adding peanuts, dried prunes, fried pears or peaches, other kinds of chiles, or anything else you think might work. You may also want to experiment with different types of chocolate. Try using Mexican Ibarra or Abuelita chocolate, which is traditional (However, I don’t use it because it contains chocolate and cinnamon flavoring rather than the real thing.) Or try using unsweetened baking chocolate. Make it your own signature dish!

If you can’t find some of these ingredients, there are a few possible substitutions that will make the dish simpler (but a bit less authentic) but equally tasty. Instead of the dried chiles, use a couple canned chipotles in adobo sauce (be careful, they’re spicy!) and chili powder. Instead of roasting your own tomatoes, use canned tomatoes, and skip the plaintain or try using a banana instead. 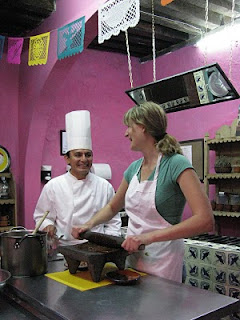 1/2 a plaintain, cut into half or quarters lengthwise

8 roma tomatoes, cut in half lengthwise

(*If possible, otherwise the other kind works too.)

Remove the stems, seeds, and ribs (veins) from the chiles. This is important—the majority of the spice of a chile is found in the seeds and the ribs.

Coat the bottom of a cast-iron pan or heavy skillet with a thick layer of vegetable oil and heat on medium-high. Be careful not burn the oil. Fry the chiles in the oil—turning occasionally—until crispy. Remove from oil and set aside.

Following the same method, fry the plaintain. Set aside and discard oil.

In a dry cast-iron pan or on a comal (a Mexican griddle), pan roast the tomatoes, onion, and garlic. Turn occasionally, until both sides are lightly charred and the insides are slightly soft. 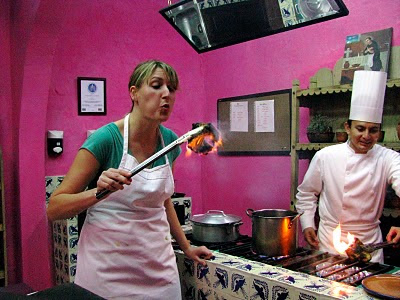 In a medium-sized pot, boil the chiles, tomatoes, onions, and garlic with the water until the chiles are soft. Using a blender, puree until smooth.

Meanwhile, char the tortilla. If you have a gas stove this can be done by carefully holding the tortilla over the flame with tongs. If you have an electric stove, this is a bit more difficult. Try roasting the tortilla in a cast-iron pan, in the broiler, or even in the toaster. Be sure the windows are open! You don’t want to set off the smoke alarm or inhale too much tortilla smoke.

In a blender, mix the tortilla (crumbled), plaintain, and water. Puree until smooth. 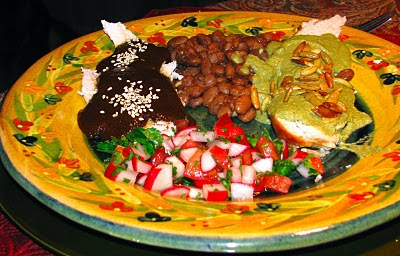 Coat the bottom of a 7-quart saucepot with vegetable oil and heat on medium-high. Add the tomato and chile puree to the hot oil. (Be careful! It has a tendency to splatter). Stir the boiling sauce for a few minutes, then add the tortilla and plaintain puree. Stir then add chocolate, sugar, and salt. Add more water as needed. Let the sauce simmer for approximately 45 minutes.

Serve over boiled or roasted chicken or turkey and sprinkle with sesame seeds.

This was the unrivaled hit at our Christmas dinner. We just couldn’t stop eating it!

6 serrano chiles (or 2-3 jalepenos), cut in half and seeds and ribs removed. *Add more if you’d like a spicy sauce.

1/2 a medium yellow or white onion, cut into 2-inch chunks

1 bunch epazote (If you can find it. The sauce is still great without it.) 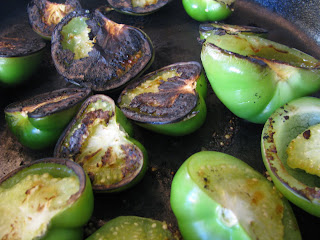 On a comal (Mexican griddle) or in cast-iron pan, roast the tomatillos, onion, garlic, and chiles until browned/carmelized and slightly tender.

Puree tomatillos, onion, garlic, and chiles in a blender with 1-cup water and cilantro (stems are fine) and epazote (if using) until smooth.

Heat a cast-iron pan on medium-high heat and coat bottom of pan with a generous layer of vegetable oil. Fry the pepitas (pumpkin seeds) until golden brown, stirring frequently.

Save a handful of pepitas for the garnish and puree the remaining seeds with 1-2 cups water in a blender until smooth.

Coat the bottom of a 5-7 quart pot with vegetable oil. Over medium-high heat fry the puree of pepitas for two minutes. (Add the sauce to the oil carefully as it will splatter.) Add the tomatillo puree and salt and simmer for at least 15 minutes. Add water as needed to reach desired consistency.

Serve with boiled or roasted pork or chicken or even with some sturdy white fishes. Use the remaining pepitas for garnish. 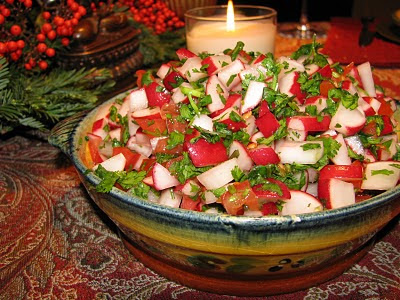 If you’re like me, you’re probably a bit lukewarm about radishes. This salad should change your mind. It puts radishes in a whole new light! This salad is light and fresh and pairs well with the heavy mole sauces. If you’re organized enough to start cooking in advance of when you’re going to eat, this salad improves with a couple hours of marinating time; however, if it sits too long the skins will bleed and the salad will turn pink.

Juice of 3 limes (or to taste)

Mix all ingredients together and enjoy! 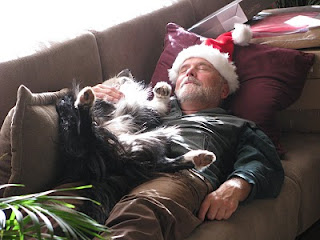 When you've finished eating your Christmas feast, take a little nap with a puppy! Happy Holidays!


Stay tuned for more stories, recipes, and photos from my trip to Puebla!

For more information about cooking classes in Puebla...
www.mesones-sacristia.com 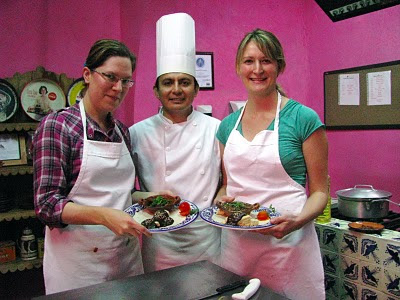 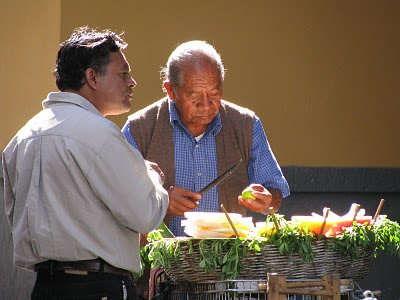 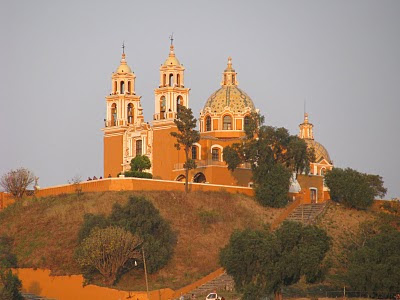 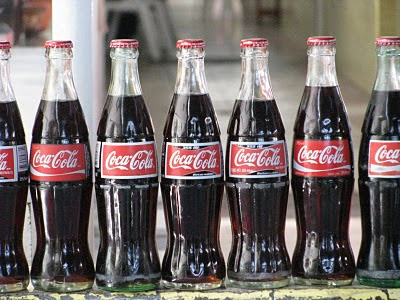 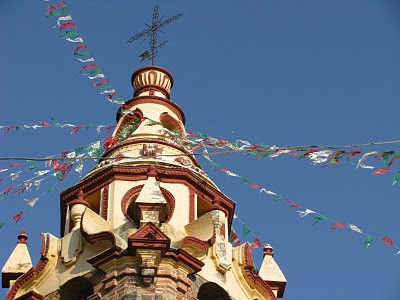