Could I Have Been Wrong?

Ecstasy was written across his face. Eyes glassy and distant, lost in thought but still managing a silly grin that grew wider with each gooey mouthful. Nearly in a trance, he helped himself to plate after plate of the rich and creamy pasta with wild chanterelle mushrooms.

At this point, you’re probably imagining an exceedingly romantic candlelit dinner for two, a string quartet softly playing in the background, and rose petals sprinkled across a white linen tablecloth. Okay, maybe that’s a bit over the top…

This is what the scene actually looked like: The blissful man was rough and burly and dressed in an old pair of jeans and a hooded sweatshirt. Scruff grew across his jaw and upper lip and engine grease stained his fingers. I was bundled in a red wool scarf (it was cold) and wearing a flour-stained apron. Though he sat next to me, I had only met this man, Robert, hours before. There were actually six of us at my friend’s house that evening all precariously balanced on an odd assortment of wooden stools, folding chairs, and other pilfered seats from who knows where. Although delicious local wine was being sipped eagerly from crystal glasses, there were also numerous empty beer cans scattered across the table.

Who said that a way to a man’s heart is NOT through his stomach? Oh yes…I did. And though I have much empirical data to support my case, I do believe there are some exceptions. This was such an occasion.

My friend, Clint, is a Renaissance backwoods homesteader type. He makes liquor from fallen fruit, mills his own wood, and has even been known to make a meal from fresh roadkill. At this time of year, however, he is most passionate about collecting wild chanterelle mushrooms in the woods. Immensely protective of his mushrooms, he doesn’t divulge where he forages, even to his closest friends and family. The other day Clint called to see if I knew where he could sell some of his surplus chanterelles. Blessed with early and heavy rains this season, the mushroom haul had been bountiful. Not able to give any suggestions, I offered the next best thing…sharing them with me! Although he continued to hock his mushrooms to local restaurants, Clint did concede to share some of the bounty. In exchange, I offered to make homemade pasta.

Clint invited some friends to his home, including Robert, and we set to work on making our feast. Every so often as I rolled the pasta dough increasingly thinner, I would see a flash of awe illuminate Robert’s face. I suppose it’s not every day you see pasta being made from scratch, especially by a non-Italian 30-something.

After three large helpings of pasta and a generous serving of Caesar salad, Robert gave into defeat. Well sated, he pushed back his chair and headed outside with some of the others for what I imagine was a post dinner smoke.

Toward the end of the evening, Robert caught me in his arms and gave me a big hug. I said, “It was very nice to meet you. Have a nice evening,” thinking that he was saying goodbye. (I was ready to head home and had been in the process of gathering my things.) A bit taken aback, he replied, “I’m not going anywhere. I just wanted to give you a hug.” To which he should have added, “The pasta made me do it.”

So, it looks as though I may need to recant—or perhaps just amend—my aforementioned belief that food is no longer the way to a man’s heart in the modern world. I suppose only time will tell because no matter how much I try not to, I know I will keep cooking…for friends, for family, for the men I date, and even for the ones who just happen to sit next to me at a dinner party.


Homemade Pasta with Chanterelle Mushroom Cream Sauce
If you don't have a pasta maker (because who really does?), buy fresh pasta from your local grocery store. If you do have a pasta maker gathering dust, pull it out and give it a whirl. Making pasta at home is fun and once you get the hang of it, pretty easy. If you're interested in purchasing one, get a good one. It will save you time and heartache. I got mine at Sur la Table, but they're also available from Amazon and other kitchen supply stores.
Sur la Table Marcato Atlas Pasta Machine

Mix the egg and flour in a food processor (or with a fork) until the dough starts to come together and then knead by hand until the dough is smooth and elastic. If it is too dry, wet your hand slightly and continue to knead. Be careful. It's difficult to add flour if the dough becomes too wet. Process dough in pasta machine according to manufacturer's directions.

Chanterelle Mushroom Cream Sauce
This recipe is not an exact science, but with any combination of butter, cream, and cheese, you can't go wrong!

Wild Chanterelle mushrooms, in bite size pieces (pull apart like string-cheese)
*If you don't have a friend like Clint, use dried mushrooms
Butter, lots and lots
Garlic, a clove or two finely diced

Dry white wine, feel free to be a bit heavy handed
Heavy cream, pour until the sauce looks thick and delicious
Parmesan cheese, the more the better
salt and pepper

Sauté the mushrooms in a small amount of butter or olive oil over medium/medium-low heat. When mushrooms are tender, add butter. When butter is melted, add garlic and white wine. It's important that the wine simmers before adding the cream or else the alcohol in the wine will curdle the cream. Remove from heat and add cream and Parmesan. Add salt and pepper to taste. Toss the sauce with the fresh pasta and serve with Parmesan cheese. Buon Appetito! 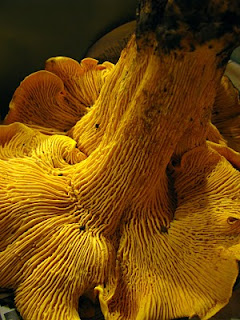