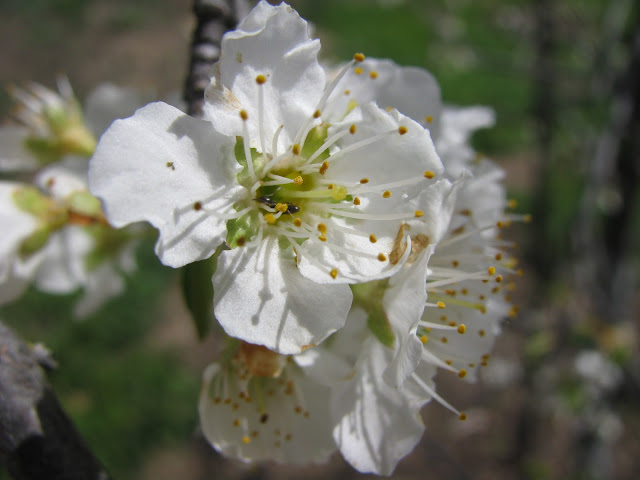 As it turns out, I'm a procrastinator. I've always thought of myself as a take-charge-get-it-done kind of person, but the truth is…I let the dishes sit in the sink until there's no room for any more, I put off packing for a trip until the last minute, and I let my lawn grow so long it's more jungle than putting green. In school I always thought I was a step ahead of my classmates who begged teachers for extensions and pulled all-nighters to finish history papers and lab reports, but in my adult years I have discovered that actually I have quite a knack for putting things off.

Last week, I decided to devote the weekend to organizing my tax documents. So, what was the first thing I did Saturday morning? I decided to clean my house. That makes sense, right? I figured I would be able to concentrate better in a clean and organized environment, which is true. But what started out as a quick tidy up, rapidly progressed into washing the dishes, sterilizing the counters, sweeping the floors, and scrubbing the sinks. This led to a load of laundry and then another and another. I would get to the taxes soon, right? I just needed a clutter free environment in which to work…at least that's what I kept telling myself. The carpet was polka-dotted with tufts of dog hair, so I decided to get them with the vacuum. Once it was out, I figured I might as well vacuum the whole house. Then, I noticed that there was cat fur on the backs of the couches, so I used the upholstery attachment and sucked that away too. As long as I was running the washer, I decided I might as well launder the curtains, the bedding, the dog's bed, the shower curtain, the bathmat, and all my sneakers. Since the shower curtain was in the wash, it seemed like a good time to scrub the tub and shower (something I despise) and give the rest of the bathroom a good scrub down too.

The morning was quickly progressing into midday, and I needed to feed the chickens and collect the eggs, but when I was in the backyard, I noticed that my vegetable garden was full of weeds. It was such a beautiful day! I told myself that it wouldn't hurt to pull a few weeds…I'd still have enough time to work on my taxes, right? The ground was soft and the weeds came out easily. In practically no time at all, I'd amassed a large pile, which was very satisfying, so I kept going. Eventually, I ended up weeding all six raised beds and all the weed-infested walkways between them. And while I was at it, I decided to plant some more snap peas too.

Somewhere between pulling chick weed and planting peas, I decided to give up on the idea of doing my taxes that day. The weather was too nice, and I realized that by working so hard to avoid working on my taxes, I had actually been more productive than I'd been in ages (I paid my bills too…did I mention that?). Sometimes when we're avoiding one thing, we inadvertently find ourselves doing the things we usually avoid. In the past, I've thought of procrastination as the thing that makes me watch daytime television and take naps at noon, but I've discovered that procrastination can actually be a great way to get stuff done. What are you avoiding? Of course, it's probably best just to do it, but if you're going to put it off anyway, what can you do in the meantime that you wouldn't have done otherwise? 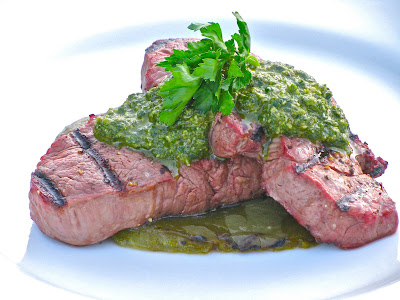 Grilled Filet Mignon (or Halibut) with Procrastination Pesto
Serves 4
Having given into procrastination and receiving its gift of productivity, I decided to treat myself to a nice dinner. I went to my local butcher and bought two small medallions of local, grass-fed beef filets that I grilled and topped with homemade pesto. This is a quick and delicious meal that can be made when you're procrastinating or when you're celebrating all the stuff you got done while putting off doing something else. 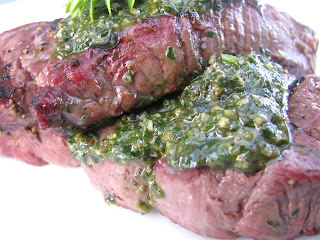 To make the pesto: Place all ingredients in a food processor fitted with a stainless steel blade. Do 30 to 40 one-second pulses until the ingredients come together in a uniform sauce but still retain some chunks. Allow the pesto to rest for approximately 15 to 30 minutes to let the flavors marry. It may taste a bit piquant at first, but after marinating, the flavors will combine to make a sauce you'll want to eat by the spoonful. 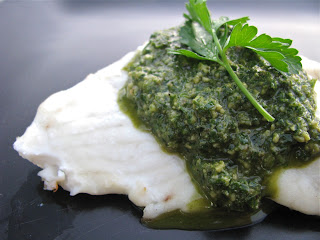 To grill the meat/fish: Preheat a gas grill to high. Sprinkle the beef with salt and pepper (leave the fish plain). Cook the filet mignon approximately 2 to 4 minutes per side for medium-rare. Place the fish on lightly greased foil and cook with the grill cover down until just barely cooked through, approximately 10 to 15 minutes. Remove from the grill and top with Procrastination Pesto. Serve extra pesto in a bowl for guests to add to their meat/fish. The pesto is also a great condiment for roasted potatoes if served as a side dish.

Toss the leftover pesto with pasta, diced tomatoes, and arugula the next day for a delicious and fresh pasta dish. 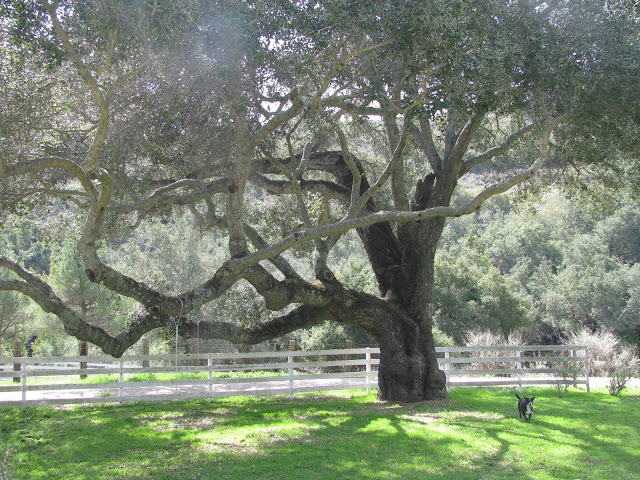