Living Your Truest Self

Recently, while reading a novel about a woman reunited with the daughter she gave up for adoption 18 years earlier, surprisingly tears welled in my eyes and tightness gripped my chest. Although it was an entertaining read, it wasn’t particularly memorable or well crafted—more the type of book you read on vacation, forget you ever read, and then buy again a few years later. However, there was something that struck a deep chord within me that I couldn’t quite figure out, since I’m neither adopted nor have I given a child up for adoption.

But then I realized… For most of my life, even though I don’t yet have children, I’ve pictured myself as a mother. Although it wasn’t particularly glamorous or sexy, my friends in high school nicknamed me Mother Meadow since I was always taking care of everyone. For some reason, I’m the person that babies smile at in the grocery store and young children seem to gravitate toward.

Even though I will never intimately know what it’s like to place a child for adoption, I closely identified with both the mother and daughter in the story. My mother and I are very close, and I feel the role of “daughter” deeply. And, although I don’t yet have children of my own, as a schoolteacher I spent many years in a mothering role. So, I realized that although I don’t personally know what it’s like to be adopted or to choose adoption for your child, I could deeply empathize because both “mother” and “daughter” both clearly shape my identity.

Have you ever noticed that when you’re doing what’s in alignment with your identity that you feel a much deeper connection and everything seems to just flow?

A few weeks ago I went on a 5-day guided hut-to-hut backpacking trip in Yosemite National Park. Although the trip had been months in the planning and was quite expensive, I nearly cancelled a few days before. It seemed that everything that could go wrong had, and I wasn’t sure that I would physically be able to do it. Due to piles of work and being sick, I hadn’t been able to train for the rigorous hike. My new boots were stiff, and I was concerned about the heavy pack aggravating my sciatica, not to mention being prepared for the high altitude.

However, just as I’ve always identified with the role of “mother,” I’ve also felt equally at home in the wilderness. Although it’s been years since I’ve been able to backpack (due mostly to the sciatica), as soon as I reached the mountains, I felt alive and full of vigor. As we embarked on the hike, I felt strong and vital and found myself maneuvering around boulders and scaling cliff-like mountains with ease. Having spent a great deal of time in the backcountry in my teens and twenties, I was instantly in my element. My identity as an “outdoorsy” person had been reignited. As a result, not only was I able to tackle the mountains and absorb their powerful energy, but also because I was living in accordance with my true self, I even had extra energy, which allowed my nurturing side to shine. I was able to help some of the others and even bandaged a wound.

We are at our very best when we’re living in accordance with our identity. When we embody our truest selves, we feed our soul and feel most alive.

What makes up your identity? Are you living in such a way that you’re feeding your soul? How would your life be fuller and richer if you lived in alignment with the way you see yourself? Believe it or not, the more you feed who you truly are, the more easily things come to you. I tackled the mountains because I see myself as someone who tackles mountains. Here’s to living our truest version of ourselves!

The people who run the High Sierra Camps in Yosemite graciously offered to provide me with gluten free meals, for which I was immensely grateful. I was, however, a bit dubious when I heard that my daily sandwich would be a “lettuce wrap” since I didn’t think it would provide me enough energy to scale the mountains. But, the sandwiches they created by stuffing the interior of a Romaine heart were clever, delicious, and satisfying. 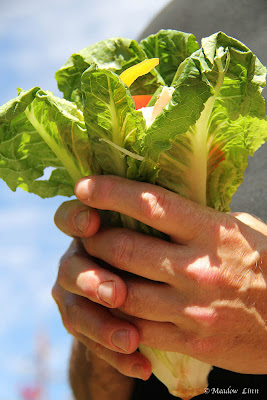 You can make this sandwich with whatever filling you choose, but this is what I ate in Yosemite…

• 1 heart of Romaine lettuce, one or two inner leaves removed, but keep the stalk intact

• Sliced turkey, ham, chicken, or any other favorite deli meat


Assemble the sandwich by filling the interior of the Romaine heart with your favorite goodies and enjoy with good friends and beautiful scenery. 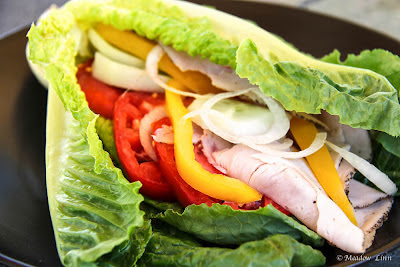