Making Peace with the Jungle 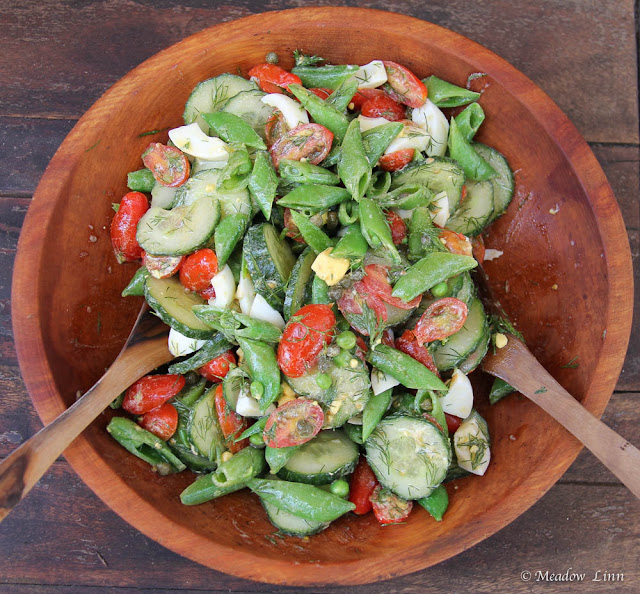 Yesterday I did something wild and crazy and totally out of character.

I planted my garden without a plan! For some of you this might not sound like a big deal, but for me…this was huge.

In the winter months, typically I spend hours pouring over seed catalogs highlighting, circling, and marking the varieties of vegetables that get my mouth watering. Then I go through the catalog at least another two or three times to narrow down my choices until I end up with a reasonable amount of seeds.

Then, just before it’s time to plant, I draw diagrams of my six raised beds and the flat garden area behind my patio. Although I usually prefer writing with a pen, I use a pencil for this task because I know there will be a great deal of moving and reorganizing, and the eraser will be a useful tool. When diagramming, my goal is to arrange vegetables from similar plant families together, do as much companion planting as possible (ex. basil deters pests and disease from tomato plants), and not plant the same type of vegetable in the same spot as the year before (this helps keep the soil nutrient rich and deter pests). I draw out not only where each kind of vegetable will go, but also where each variety of that vegetable will go. For instance, I might draw three straight rows, one for red beets, another for golden beets, and the final one for candy stripe.

This year, however, I threw caution to the wind and didn’t make a plan. Not only that, but I planted rather willy-nilly. I spread many of the seeds in the same manner that one might scatter bread for wild ducks. With a shake of the wrist, three kinds of beets, two kinds of carrots, two kinds of kale, and a rainbow assortment of chard will grow together in one bed in a heterogeneous hodge-podge.

There’s something both freeing and terrifying about stepping out of my comfort zone and at the same time, for all intents and purposes, breaking the “rules” of organic vegetable gardening. I’m not sure what overcame me.

Was it boredom? The midday sun was rapidly gaining on me and I knew that within an hour it was forecasted to be 100 degrees, and crouching over the soil was getting tedious and hot.

Was it busyness? Did I have too many other things on my plate that planning and carefully planting my garden felt like too much of an imposition?

Was it wisdom? Had I finally realized that I wasted hours diagramming when nature has a mind of her own regardless of my plans? No matter how hard I try to keep things orderly in my garden, every year I end up with an untamed jungle. So, why not give in to the chaos rather than fight it?

Only time will tell how I will feel about this decision once the plants begin to grow. Will each of my garden beds be filled with plants of varying shapes, sizes, and hues that create a harmonious whole, or will I end up with a disorganized mess and a tiny harvest? Sheer genius or a recipe for a garden disaster?

I’m a thinker. I’m a planner. I’m an analyzer. I’m usually methodical in my approach to my life. This has mostly been a boon; however, there are many times when I could use more action. Perhaps my garden this year has sacrificed itself to allow me an opportunity to practice “jump now, look later.”

Gardening can teach us a lot about life. Sometimes we make plans and life takes us on a completely different path, just like how my garden turns into a jungle every year, no matter how much I try to organize and tame it. But, there’s always a delicious harvest. In my younger years I imagined that by now I’d have a house full of children and a loving husband, but never in a million years would I have dreamed that I’d have a cookbook published by a major publisher and distributed around the world.

Has your life gone according to your plan? What is different than you expected? What is infinitely more wondrous? Even if you feel like you’ve ended up with a disorganized jungle, is the harvest still good?

One of the best things about planting a vegetable garden is imagining all the amazing meals that will come from its bounty in the months to come. This simple, delicious, and fresh salad is a quintessential garden salad. Most of the ingredients can be picked right out the back door. It’s wonderful at picnics.

To boil the eggs, place them in a small pan covered with at least an inch of cool water. Bring to a boil. 10-15 minutes of boiling is a good rule of thumb. Immediately plunge the eggs in cool water to stop the cooking.

Meanwhile bring another small pan of water to a boil. String the snap peas. To blanch the snap peas, put them in the boiling water for 1-2 minutes. Immediately drain and rinse with cool water. Slice them into halves or thirds (depending on their size) at an angle.

Slice the cucumber, cut the tomatoes in half, chop the dill. In a large bowl combine the snap peas, cucumber, tomatoes, dill, and capers. Peel the eggs and cut them into dime or nickel-sized pieces and toss with the vegetables.

In a small bowl, whisk the olive oil, lemon juice, and salt together. Drizzle over the salad and toss. Enjoy! 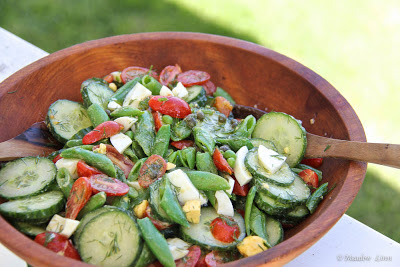 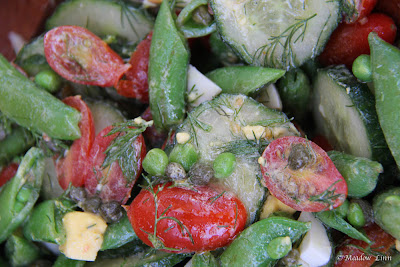