“It takes six million grains of pollen to seed one peony, and salmon need a lifetime of swimming to find their way home, so we mustn't be alarmed or discouraged when it takes us years to find love or years to understand our calling in life. Everything in nature is given some form of resilience by which it can rehearse finding its way, so that, when it does, it is practiced and ready to seize the moment.”

~Mark Nepo, The Book of Awakening
***

While walking in Astoria, Oregon recently on a blustery, rainy day, I saw the most beautiful fern growing out of a derelict wharf. Although the wharf had been abandoned when the cannery closed, and the sea was reclaiming the remaining pilings, there was new life. Amidst the wind, rain, and neglect, the bright green fern had found a way to persevere. We humans like to see ourselves as different and separate from nature; yet, we, too, find ways to grow and thrive, even when there are outside forces fighting against us. Life always finds a way, no matter the obstacles…although it might not always be how or what we expected.

Do you remember the Rubix Cube? Every move affects a future move and every twist depends on the previous one. Just as in nature, everything is interconnected, which makes me wonder… Did the fern grow in spite of the harsh conditions or because of them?

When I was a child, my friend and I decided we could speed things up on the Rubix Cube by removing the colored stickers and repositioning them. Unfortunately, not all the stickers were easily detachable. So, instead of achieving our ultimate end, we made it so the game would never be winnable. There are times in life to break rank, and there are other times when more is gained from ebbing with the tide and allowing each action to be the building block for the following one.

Often I feel as though my life is like the Rubix Cube. Every decision depends on another, which means sometimes I feel like I’m in a holding pattern. However, despite my occasional worries and concerns about my life not unfolding as planned, I do know deep down that every step I take is leading me toward my future. I wouldn’t be where I am today if it weren’t for both the good and the bad, the expected and the unexpected.

My current life is pretty darn good; however, it feels as though I’m standing on a precipice, unsure which direction the wind will blow. Professionally I seem to be at the beginning of an exciting journey. But, in my personal life there is uncertainty. Do I dig in roots, or do I wait to see where the breeze will send me?

Like Mark Nepo’s peony and salmon, I’ve been patiently (sometimes not so patiently) waiting to seize my moment. However, there’s always this nagging thought in the back of my mind: How can I plan for the future when I don’t yet know whom (or if) I’ll marry or where I’ll live? I moved to this town because my parents were here, but they’re planning to relocate. So, when they move, where will I go?

Perhaps the answer to my question can be found in the fern on the wharf. It didn’t ask: “where?,” “why?,” or “when?,” it simply grew because it had no other choice. Life doesn’t always unfold the way we expect or hope, but it does seem to have a way of working out nevertheless. We just have to be willing to let nature take its course.


Are there perceived hurdles in your life preventing you from achieving the life of your dreams? Is the wind blowing, but you don’t know which way it will carry you? Does it feel as though every decision depends on another? Are you in a holding pattern? No matter the obstacles, nature always finds a way. Humans are resilient. When life knocks you down, remember the fern. You will also find a way.

Date Shake
(Raw and vegan, but no one has to know!)

I’ve always considered myself to be pretty easy-going about food. Whether it was salmon roe in Moscow, a hotdog at Safeco Field, or micro-greens at a trendy LA restaurant, mealtime filled me with joy. When I first discovered that I had dairy and gluten sensitivity, going out suddenly became an angst-filled occasion. The most difficult was relinquishing my identity as someone who didn’t need a “special diet” asterisk next to her name.

However, just like the beautiful green fern, we are resilient, even when changing our eating habits.

Date shakes are a popular treat in Laguna Beach, where I lived as a small child. Unfortunately, when I gave up dairy, I also had to give up milkshakes. Or, so I thought… It turns out that I actually prefer this light and refreshing “milk”shake. Resilience has its perks!

I use a Vita-Mix, which has a very powerful motor. With a standard blender, consider starting with less ice until you’re sure it can handle 8 cubes.

Place all ingredients in the blender in the order listed. Process—with the top on—by starting at the lowest setting and slowly increasing the speed until you’re on the highest setting. Blend until smooth. 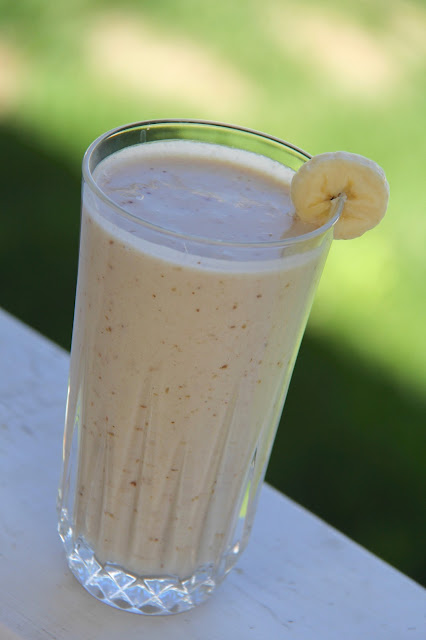